Dismissing “I’m Not There”

The Envelope‘s Pete Hammond is reporting that Todd Haynes‘ I’m Not There didn’t play very well with a smallish Academy group. The Bob Dylan epic “lived up to its title and gathered a much smaller academy group that saw a few walkouts,” he writes, “according to two members who were both unimpressed — even by Cate Blanchett‘s bravura supporting turn as one of six Dylans. 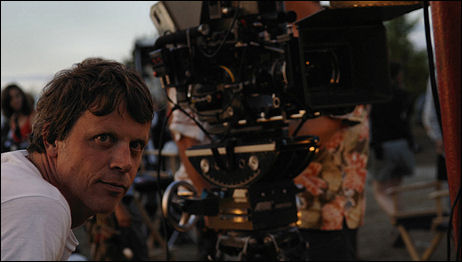 “‘I think the only people who will like this thing are the ones who love this guy’s music,” one academy voter told Hammond. Once again, obiter dicta — “this guy’s music” — has revealed a bit more than intended.

Academy members are not obliged to worship, like or even admire I’m Not There, but Academy slugs like the person quoted above are an embarassment. More than that — they’re an obstruction. They cheapen and devalue movie culture by dismissing rich, valuable films, not out of conviction or distaste but impatient sloth. Like an ADD-afflicted child might toss aside a toy or video game, or the way my father — a shadow of the man he used to be — dismisses new writers and movies because he doesn’t care to get into anything new. The mind-blowing element is that Dylan is ancient history and the person quoted above still regards him askance.

What a revoltin’ development that all this Oscar season energy and passion and promotion being focused on trying to second-guess the opinions of people like this. The colors and currents of the world streaming into our souls through esprit du cinema, and yet many handicappers will only talk up the Oscar potential of films that have the approval of obviously stunted people — folks who’ve worked long and hard and distinguished themselves in this or that way over the course of their lives, but are alive and engaged right now only in the barest sense.

November 21, 2007by Jeffrey Wells10 Comments
« Previous post
“Eddie Coyle” at the Brattle
Next post »
“Michael Clayton” is over the hump