This morning’s snap decision has been to shine the 9:45 am screening of Niki Caro‘s The Vintner’s Luck and just stick with the column until Michael Moore‘s Capitalism: A Love Story screens at 12:15 pm. I felt guilty about this, of course, but then a Manhattan critic friend stopped by at my Starbucks office to tell me that the response to Caro’s film, which had a public screening yesterday at the Winter Garden, has been…well, let’s just say the jury’s out. 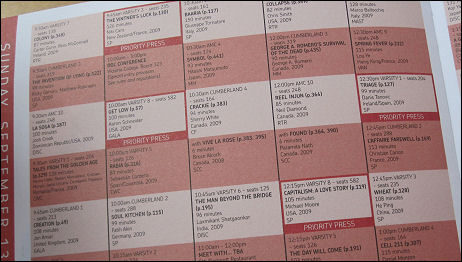 So it’ll be Capitalism followed by a Coen brothers chat at 2:45, a 6 pm screening of Jacques Audiard‘s The Prophet, and then a dinner thing for Chris Rock‘s Good Hair, which I won’t see until Tuesday.