Publicist Mickey Cottrell and Neil Young Trunk Show director Jonathan Demme got waffle-ironed when they were informed just after midnight that the Toronto Film Festival “has double booked screenings at 2 pm tomorrow, when ours had been set.” Two replacement slots have been offered, and I’m sure it’ll all work out after the dust settles. But this plus the oddly clueless Toronto no-show by Neil Young, as reported last Friday by the Toronto Star‘s Peter Howell, makes this concert film’s TIFF experience seem like one of the all-time debacles. 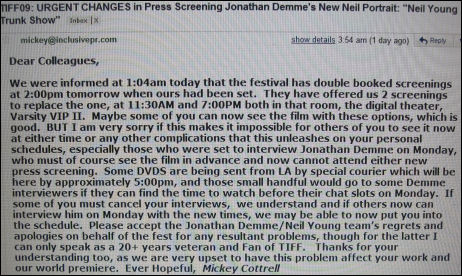 “They say rock ‘n’ roll never forgets,” Howell wrote, “but someone in charge of Neil Young’s itinerary evidently did.

“The official TIFF schedule has Young as a confirmed attendee, along with director Jonathan Demme.

“‘This is the first time I ever heard I was supposed to be there,’ Young says from his California ranch home near San Rafael. ‘I didn’t know I was a scheduled event.'”