I escaped from this morning’s screening of Derrick Borte‘s The Joneses after twelve minutes and quickly hightailed it over to the Cumberland for Werner Herzog‘s Bad Lieutenant: Port of Call New Orleans, which I missed only a bit of. I’m not much of a laugh-out-loud type of guy but I laughed my head off at portions of this deranged psycho-dramedy, although if it was my call I would have titled it Bad Lieutenant: The Silence of the Reptiles. 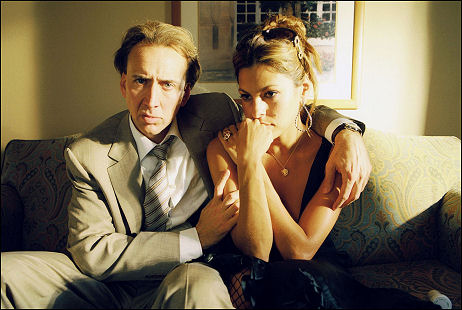 It’s hilariously bent and livewire and even surreal at times, but it’s still not entirely the ultimate cuckoo Nic Cage film I was hoping for. I loved that Herzog constantly subverts the suspension-of-disbelief element that one is naturally inclined to submit to as the proverbial campfire tale is told. And yet time and again Herzog reminds the viewer that Bad Lieutenant doesn’t know from campfires and is essentially a goof — a deliciously eccentric druggy-crazy cop movie about a deliciously eccentric druggy-crazy cop movie.

And with such a consistent emphasis on extreme acting, deliriously dopey iguana and crocodile shots, and other outrageously skewed bits the occasional stabs at emotional sincerity just seem to get in the way. So it’s not really pure and unified thing. It lurches around, which is cool in a sense but also a little disorienting

But most of Herzog’s Lieutenant is a boldly feisty mescaline crime movie, and when Cage is channeling that wackjob current that he knows and channels so well, it’s well worth the ticket price.

Bad Lieutenant: Port of Call New Orleans would be a great midnight movie if the midnight movie business amounted to anything these days. It’s definitely something to watch stoned. I began to sense a kind of contact pot high; at times a bit more than this. With all the iguanas and crocks slithering around I sometimes felt like I was Hunter Thompson in Fear and Loathing in Las Vegas after putting a little extract of pineal gland on my tongue.