There’s a dinner scene, David and his wife Iz (Ana de Armas) and four or five friends, and David mentions that he’s working with Efraim and then a woman tells him he might want to watch his back because Efraim reportedly stole money for an uncle or something like that. A debate ensues about whether or not Efraim is a bad guy, etc. All of a sudden Efraim strolls into the room and announces “hey, it’s me, the sketchy guy” or words to that effect. And then some dorky guy, looking to obscure the mood, mumbles “hey, man” to Efraim, and Jonah instantly smells the bullshit and imitates the guy to a T — “Hey, man.”

I mean, I laughed out loud at this. I chortled, I mean, and I’m generally an LQTM type. I’m seriously thinking of going back to see War Dogs again tonight just to savor this bit. Really.

There’s another great scene that expands upon that legendary Winston Churchill quote about warfare — “There is nothing so exhilarating as to be shot at with no result.” It happens during a Jordan-to-Iraq delivery of boxes of Beretta handguns, right through the infamous “triangle of death,” David and Efraim in a truck with some Jordanian guy at the wheel. And then some bad stuff almost happens and it looks hairy and then, out of the blue, they’re saved by the U.S. military (guys in trucks, an armed chopper).

I don’t believe it actually happened this way (Phillips pushes it too far, almost going for schtick) but the simultaneous feeling of being saved from death and feeling the joy of life…well, it’s pretty damn wonderful.

That’s all I’m going to say. See it or don’t but Jonah is worth the price. 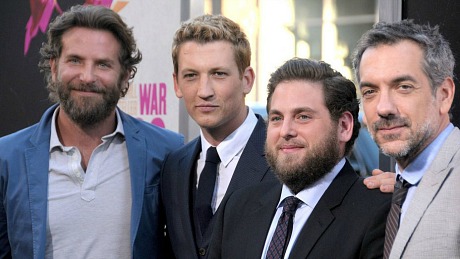