Dolphin Lady on The Cove

Last week a serious dolphin lady and longtime friend named Gini Kopecky-Wallace, whom I’ve known since ’79, went to see The Cove (Roadside, 7.31). An off-and-on participant with a research project studying wild dolphins for more than 20 years, Kopecky-Wallace writes about dolphins, whales, diving, islands and oceans any chance she gets. Here’s her review:

It wasn’t an especially dolphin-loving crowd that showed up for last Wednesday’s screening of The Cove — the Jim Clark/Louie Psihoyos documentary about a group of filmmakers, free divers, surfers, techies and activists who team up to document the annual dolphin slaughter that takes place in a sealed-off cove in Taiji, Japan. The talkers in the room were more into bragging about themselves. The film got mentioned exactly once by a latecomer trying to score points by putting it down. “Now we’re all going to learn,” he said, “that killing dolphins is bad.”

But nobody was smirking at the end. For a while after the lights came up nobody moved or said a word. Then one person spoke — maybe this same guy, maybe someone else. “Good movie,” he said soberly. And that was it. No one else said a thing. Everyone just stood and slowly filed out. Which was gratifying, I have to say, and a more accurate gauge of the film’s impact. Of course it got to me. But if it got to these people…

I think the fact that it is such a surprisingly good movie impressed everyone. You’d have to be made of stone not to be horrified by the subject matter and humbled by, good lord, what it took to get the film made. But you hear “killing dolphins” and you gird yourself. You don’t expect a documentary that also works as a feature film, with heroes, bad guys, action, suspense, horror, heartbreak, beauty. You don’t expect to be swept up.

The material for it was there. Dangerous mission, colorful characters, great cast — including beautiful and brave human mermaid Mandy-Rae Cruickshank, and former Flipper dolphin trainer-turned-dolphin liberationist Ric O’Barry with his wonderfully weathered face. But the filmmakers worked the material well too — building suspense, sustaining the action, never straying too far from the main story, jazzing up visual effects with thermal-camera footage, and going easy but not too easy on the carnage. 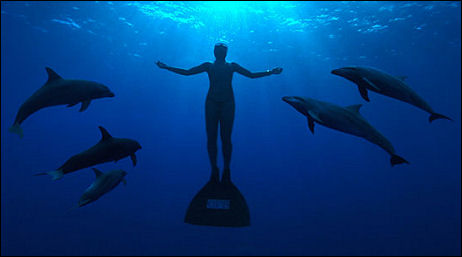 Watching a lone dolphin struggle and flail as it bleeds to death is excruciating. Watching dozens being brutally speared makes you numb.

I can see where some researchers, advocates and activists might have a few arguments with this film — what’s said and what isn’t, what’s shown and what’s not, how certain issues are framed, who takes and gets credit for what. The film also isn’t completely clear on whether the American captive display industry — the people who bring us dolphin-swim programs and orcas in tanks — can or can’t be linked to these captures and killings. Important as the film is for what it exposes and is trying to stop, it also makes me yearn for another film — maybe a sequel? — that focuses American audience attention on dolphin issues closer to home.

Still. On my way into the ladies’ room after the screening, I passed a woman coming out who took one look at my expression and knew we’d just seen the same film. Impassioned discussion ensued. What a film! She’d had no idea! It made her ashamed to be human! “It sure makes you think differently about going to places like marine parks.” She writes about film, wanted to do something to help. “People need to know.” Maybe she could interview Ric O’Barry. “Or I could do a column on what’s wrong with SeaWorld.” Her higher-ups wouldn’t like it, she said, fire dancing in her eyes. “But it’s my column.”

Score 1 for The Cove. Watch crazy-brave people doing crazy-brave things and there’s no telling what other people will decide they can do.

(Kopecky has written about diving in Bonaire, interacting with wild dolphins, and islands she has loved for Shape Magazine. She wrote about the plight of Keiko, the orca star of Free Willy, and about the handling of the dolphins used in the remake of Flipper for The New York Times Sunday Arts & Leisure section.)