Having delighted over Bill Nighy‘s performance in David Hare‘s The Vertical Hour two nights ago at the Music Box, it suddenly hit me this morning that I haven’t attempted to bring any Oscar- season favor whatsoever upon a fascinating Nighy performance that easily qualifies as Best Supporting Actor-level. No, not his older-husband-of-Cate Blanchett role in Notes From a Scandal (in which he’s perfectly fine) — I mean his gloppy squid-faced Davy Jones in Pirates of the Caribbean: Dean Man’s Chest. 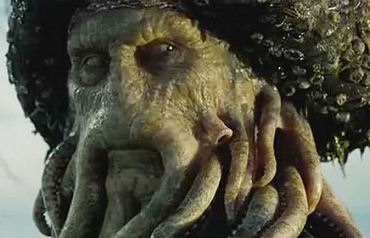 In this otherwise-despised film Nighy not only filled the shoes of the greatest movie villain to come along in years, but gave the year’s most under-valued performance because nobody regarded Jones as anything more than a CG crea- tion. Half it was that, yes…but the other half came straight from Nighy. I wrote last summer that under the makeup, Nighy “delivers his lines with perfectly honed humor and wit. He should be nominated for a Best Supporting Actor Oscar, really.” 50 or 100 years from now audiences will be getting and savoring what Nighy did here. I think it merits a fresh salute right now.
By the way, please read John Lahr‘s review of The Vertical Hour and especially Nighy’s performance in this 12.4 New Yorker piece.