Don’t let anyone tell you that the tide is turning on Hancock, and that David Denby‘s rave in the New Yorker was some kind of indication that the initial bad buzz is not to be trusted and that it’s just a matter of the cool people sending out the cool word. 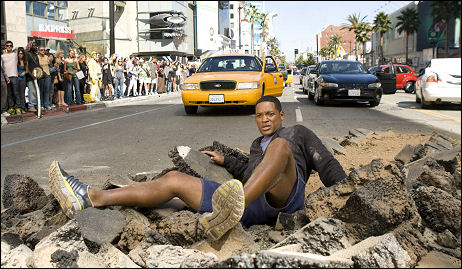 Forget all that. Hancock is a cloddy but decent-enough thing at first but then — wait for it — it shoots itself right in the face with a .44 Magnum. It does this at the two-thirds mark with (a) an astoundingly ridiculous plot turn, (b) a totally absurd abandonment of logical behavior concerning a certain character, (c) an introduction of a tediously loathsome fat-faced villain who does nothing but bring everyone down and spoil the vibe, and (d) a ludicrous (and suddenly introduced) back-story dependency that is ridiculous in its complexity and certainly makes no rudimentary sense.
How does a movie directed by Peter Berg (never a Stanley Kubrick-type guy but a fairly able guy and a shrewd operator) and produced by three very savvy hombres — Akiva Goldsman, James Lassiter and Michael Mann — along with star Will Smith turn out this badly? How could they have gone with such a drop-dead awful third act?
The villain has to be Smith; he must have pushed it through. Goldsman knows what makes a good story — he’s no dummy. And Mann clearly knows his way around a solid three-act structure and what good stories have to do. Did these guys actually produce this film or just sit back and glad-hand Smith and pocket the paycheck? What the hell happened?
Hancock, which I paid to see at the Arclight last night (after catching Hellboy II at the Chinese), is a crudely destructive but tolerably entertaining cartoon for the first act. A runamack alcoholic superhero creating titanic havoc and earning everyone’s enmity — fine. The second act, which is about Hancock’s prison time, quiet meditation, rehab and p.r. restoration, is less engaging but not too bad. But the third act, trust me, sends the Hancock train completely off the rails and crashing into the stockyards. It is not just bad — it is confounding, mind-boggling, nuts.
I could feel the energy hissing out of the audience last night once the third-act meltdown settled in. Some laughed it off; some were scratching their heads as they smiled at their dates; some were walking out with very pissed-off expressions. I have to get dressed and make a private screening of a friend’s movie in less than an hour, but this movie is one of the weirdest big-budgeters I’ve ever seen because it’s acts as it wants to destroy itself. It has no interest in doing that dance of skill and spirit and occasional movie magic that lifts you out of the third-act quagmire and sends you out satisfied.
Hancock dives into a third-act sinkhole and goes, “Whuhhh…we’re diving into a pit of insanity now and we’re not leaving! Get used to the stink pit! You thought this movie had a reasonable attitude and would avoid this kind of thing….surprise, assholes! We were a ‘pit’ movie all along and you just didn’t realize it until the third act, so fake-out and fuck you! Because we’re getting paid anyway.
“You don’t want to know the realm we live in. You’ll never get there anyway. We are the gods and you are the peons. We lose our bearings because we feel like going there because we’re arrogant, which means pulling the rug out in the third act and you, the audience, pay to see it regardless. A pretty good deal from our end!”