With the five-screen TIFF Bell Lightbox finally completed, the entire Toronto Film Festival is moving downtown this year. I don’t know to what extent the old Bay-Bloor haunts and hotels will be included, if at all, but I know that press and industry screenings at the Varsity 8 are total history. They’ll now be held at the Scotiabank theatre on John and Richmond Streets, just south of Queen. 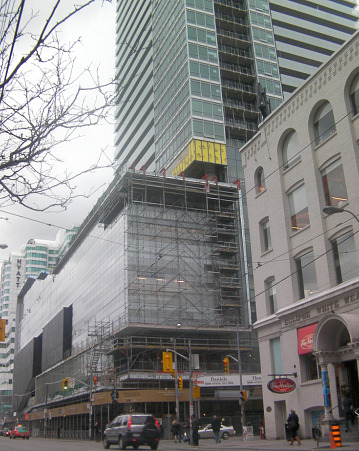 Just forget the whole Yorkville scene, for the most part. (Right?) Those Starbucks I used to visit and file from — out. All those snazzy hotels and nice bars and beautiful Yorkville women and swell Yorkville restaurants — deep-sixed for the most part. Fewer trees and shade. Will the festival still be using the Cumberland Cinemas, or is that too far out of the downtown loop? Same black squirrels, of course.

And I’m going to have to find a place to stay downtown instead of focusing on something in the Yorkville area. I haven’t even begun to poke around.

The Bell Lightbox occupies “an entire city block in the heart of Toronto’s media and entertainment district,” according to the site, but all it has are five lousy screens with the biggest one (theatre #1) containing about 550 seats? A friend tells me the TIFF fathers “want the Lightbox to be like the Palais in Cannes.” I don’t know how that would work. The Grand Lumiere and the Salle Debussy are much, much bigger than the biggest Lightbox theatre, which will be about the same size at the Varsity 8.

I haven’t heard anything about any press centers with deskspace, wifi and flatscreens for filing reviews. The great thing about Cannes is being able to run right out of the Grand Lumiere and into the Orange press cafe (or into the other press room with all the flatscreens). Will there be a similar-type wifi facility adjacent to or within the Scotiabank or Bell Lightbox? I’ve asked the TIFF press reps — we’ll see what they say.

It sorta kinda sounds to me as if the Bell Lightbox isn’t really the festival’s new home or ground zero as much as a swanky new venue being added to the ones already being used, and that calling it TIFF’s new “home” certainly doesn’t make it the Grand Palais by any stretch. Unless, of course, the Bell Lightbox is offering a roomy wifi center for the press with lots of deskspace and chairs and free cappucino and water — that’s a different story. If they do that, all is well.