John Wayne‘s anti-Communist proclamations and behind-the-scenes maneuverings in the late 1940s and ’50s and were fairly relentless and strident. To go by some accounts he was a kind of swaggering Rush Limbaugh-like figure within the Hollywood community when it came to ferreting out “reds” and “pinks.” Wayne didn’t approve of Kirk Douglas having brought Dalton Trumbo out of the shadows as a screenwriter with Spartacus, and he resented High Noon. But alongside today’s rightwing nutters he wasn’t that extreme and was by all accounts an entirely decent guy on personal terms. As far as I can discern Wayne was a kind of Barry Goldwater conservative, which was defined as a traditional preservationist position and almost liberal by 21st Century standards. (The real liberal by 2014 standards is Richard Nixon, of course.) 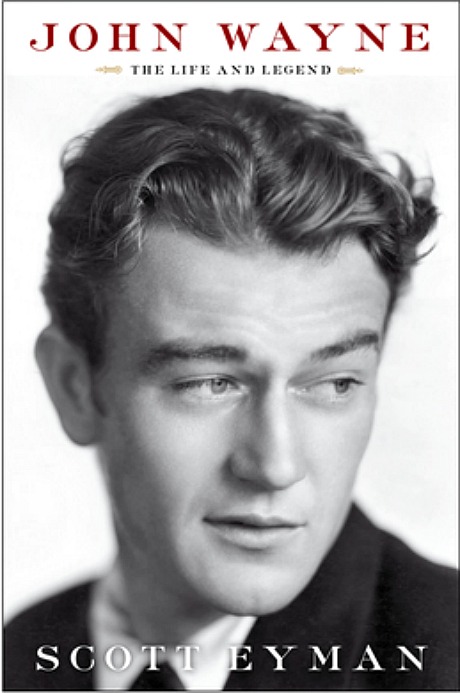 Wayne should have tried harder to hold on to that state of rugged physical grace and manlihood that he had from Hondo to The Searchers. He shouldn’t have gotten fat, shouldn’t have smoked, should have cut way down on the drinking, should have eaten fewer steaks and worn rugs that simulated his Red River hairline rather than added hair the older he got.

“He was the strong, forthright hero: authentic, stubborn, sometimes pigheaded but dedicated to justice and capable of tenderness and sacrifice; a solitary figure, called upon to defend the homestead or rescue the girl, but often exiled, in the end, from the post-frontier civilization that no longer needed his hard man’s brand of competence and courage. Whether he was a gunfighter, a cowboy or a cavalry officer, he became, for many moviegoers, the very avatar of the American frontier: the embodiment of James Fenimore Cooper’s Deerslayer, Emerson’s American Adam or what Garry Wills called fans’ sense of what ‘was disappearing or had disappeared’ from American life.” — from By Michiko Kakutani’s 3.24 N.Y. Times review of Scott Eyman’s “John Wayne: The Life and Legend.”