“Ms. Sourpants…a cringe-able actress…dumb as a rock…a classless, graceless, ungracious bitch.” This is what three guys claiming to be part of the “loyal Transformers crew” have written about Megan Fox on Michael Bay‘s website, obviously with Bay’s okay. It comes in response to Fox having complained about working for Bay on both Transformers films and comparing him to Hitler, etc. 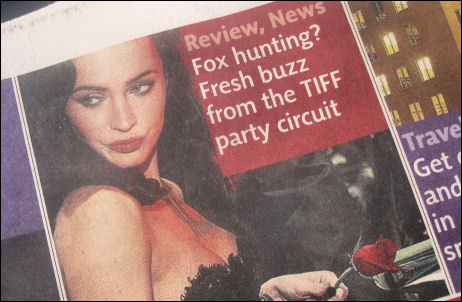 “We’ve had the tedious experience of working with the dumb-as-a-rock Megan Fox on both Transformers movies,” the letter says early on. [Note: the grammar ansd phraseology are weak so I’ve cleaned up certain portions.] “We [work] in different departments, and can’t give our names because sadly doing so in Hollywood could lead to being banished from future Paramount work. One of us touches Megan’s panties, another has the often shitty job of pulling Ms. Sourpants out of her trailer, and the last of us is near the Panaflex camera that helps to memorialize the valley girl on film

“Megan has the press fooled. When we read those magazines we wish we worked with that woman. Megan knows how to work her smile for the press. Those writers should try being on set for two movies [because] sadly, she never smiles. The cast, crew and director make Transformers a really fun and energetic set. We’ve traveled around the world together, so we have never understood why Megan was always so much the grump of the set.

“So when the three of us read Ms Fox…blabbing her trash mouth about a director whom we three have grown to really like. She compared working with Michael to “working with Hitler.” We actually don’t think she knows who Hitler is by the way. But we wondered how she doesn’t realize what a disgusting, fully uneducated comment this was? Well, let’s get some facts straight.

“Say what you want about Michael. Yes, at times he can be hard, but he’s also fun, and he challenges everyone for a reason – he simply wants people to bring their ‘A’ game. He comes very prepared, knows exactly what he wants, involves the crew and expects everyone to follow through with his or her best, and that includes the actors. He’s one of the hardest working directors out there. He gets the best from his crews, many of whom have worked with him for 15 years. And yes, he’s loyal, one of the few directors we’ve encountered who lowered his fee by millions to keep Transformers in the United States and California, so he could work with his own crew.

“Megan says that Transformers was an unsafe set? Come on Megan, we know it is a bit more strenuous then the playground at the trailer park, but you don’t insult one of the very best stunt and physical effects teams in the business! Not one person got hurt!

“And who is the real Megan Fox? About as ungracious a person as you can ever fathom. She shows little interest in the crew members around her. We work to make her look good in every way, but she’s absolutely never appreciative of anyone’s hard work. Never a thank you. All the crew members have stopped saying hi to Ms. Princess because she never says hello back. It gets tiring. Many think she just really hates the process of being an actress.

“Megan has been late to the set many times. She goes through the motions that make her exude this sense of misery. We’ve heard the A.D’s piped over the radio that Megan won’t walk from her trailer until John Turturro walks on set first! John’s done seventy-five movies and she’s made two!

“Never expect Megan to attend any of the 15 or so crew parties like all the other actors have. And then there’s the classless night she blew off the Royal Prince of Jordan, who prepared a special dinner for all the actors. She doesn’t know that the grip’s [two] daughters wanted to visit her daddy during work in order to meet Megan, but that he wouldn’t let them come because he told them ‘she’s not nice.’

“The press certainly doesn’t know her most famous line. On our first day in Egypt, the Egyptian government wouldn’t let us shoot because of a permit problem as the actors got ready in make up at the Four Seasons Hotel. Michael tried to make the best of it, and so decided to take the cast and crew on a private tour of the famous Giza pyramids. God hold us witness when we say that Megan’s response was, “I can’t believe Michael is fucking forcing us to go to the fucking pyramids!” (I guess this is the ‘Hitler guy’ she’s referring to.)

“So this is the Megan Fox you don’t get to see. Maybe she will learn, but we figure if she can sling insults then she can take them too. Megan really is a thankless, classless, graceless, and shall we say unfriendly bitch. It’s sad how fame can twist people, and even sadder that young girls look up to her. If only they knew who they’re really looking up to.

“But fame is fleeting. We behind-the-scenes guys have seen em’ come and go. Hopefully Michael will have Megatron squish Megan’s character in the first ten minutes of Transformers 3.”