The Envelope‘s Tom O’Neil is reporting that Clint Eastwood was so taken by James C. Strouse‘s Grace is Gone (Weinstein Co., 10.5), the much-admired Sundance film about a doleful dad’s inability to tell his two daughters about their soldier-mom’s death in Iraq, that he’s now composing an all-new musical score for it. 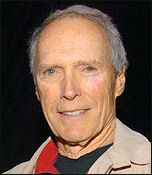 This is intriguing news — Eastwood is a gifted melodist (I’m a big fan of his Million Dollar Baby score) but his decision to assist Grace in this respect hardly constitutes a 6.5 earthquake. If Strouse’s film is going to end up as an Oscar Derby finalist (and it may well accomplish this feat), it’ll be because of what the film is deep down (which all stems from Strouse’s dramatic restraint in delivering the goods), and not because Clint king-shit Eastwood liked it enough to bang out a musical theme.
Eastwood’s score won’t be laid down “until close to the movie’s Oscar-season debut at the New York Film Festival in September,” O’Neil reports. Meantime, he adds, screening audiences are still hearing the “old score” by “relative rookie” Max Richter. I don’t recall anything being particularly wrong or unaffecting with Richter’s score when I saw Grace at Sundance last January. Eastwood’s admiration for the film aside, this is obviously about Harvey Weinstein, no fool, figuring that Clint’s name will enhance the prestige element.
In my mid-Sundance review, written seven months ago, I called Grace is Gone “the best film I’ve seen so far at [the festival]. It’s a plain and pared down thing, emotionally subtle but very specific and often moving, familiar and understated with a Midwestern voice of its own — a family film about a very American, very here-and-now tragedy. 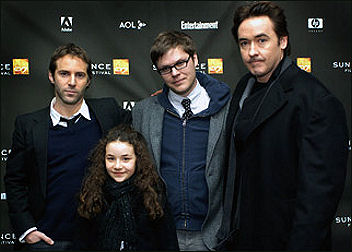 “It definitely stands a chance of being remembered at year’s end, certainly for John Cusack’s deeply touching performance (a major step forward given his career-long inhabiting of hip sardonic wise guys) and possibly in the Best Picture, Direction and Screenplay categories at the ’08 Spirit Awards, and perhaps beyond that. 2007 has barely begun, but Grace has the kind of quiet poignance and gravitas that lingers.
“It is basically antiwar (and clearly anti-Bush), but at the same time non-judgmental in its portrait of a patriotic dad (Cusack) who’s barely coping with the news of his wife having just been killed, and particularly how to break the news to his two daughters (one of whom is played by Shelan O’Keefe).
“Grace is humanistic and character-driven, but, as Sundance programmer John Cooper has written, the fact that it ‘can be construed as pro-military guarantees its greatest impact.’ It’s a curious case — a movie made by anti-war blues that exudes heartfelt respect and compassion for the patriotic reds. I’m putting it a bit bluntly, but that’s the basic deal. 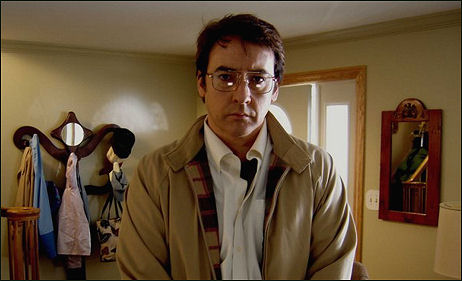 “There’s a shiftless-brother-of-Cusack character (Alessandro Nivola) who espouses antiwar views, but the film is apolitical in its focus on family grief and confusion. It’s obviously frowning at Cusack’s blind loyalty to the Bush cabal’s handling of the war but it doesn’t get into argumentative particulars or windy rhetoric.
“I can imagine this film playing in rural Republican/Bubba territory sometime later this year, and mainstream conservative guys and their wives and children coming out of the theatre and going, ‘Yeah…good film…solemn, truthful.'”
“The elegance of Grace is Gone is that it doesn’t ‘say’ anything, but there’s no mistaking what it’s saying.”

August 8, 2007by Jeffrey Wells27 Comments
« Previous post
Gooding back with family crap
Next post »
The Best and the Worst