The Best and the Worst

There was a lot of strong sentiment yesterday over the fall of New Line marketing president Russell Schwartz — some saying “ding-dong, Schwartz is dead”, others saying he was doomed given the quality of New line product. It led me to wonder, in any event, which production and distribution executives are generally considered by industry readers to be (or to have been) the best Hollywood has ever seen, and which have been the absolute worst and most despised? There’s plenty of feeling about this, I’m sure. 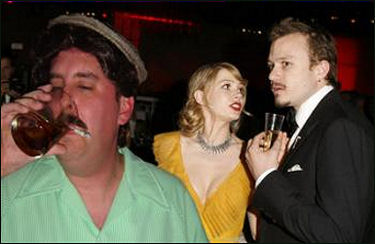 Remember, no producers or agents — we’re talking strictly studio execs. Marketers included. We’re not addressing who’s been the best politically as much as who’s been the most staunch and impassioned champion of the best material and the best filmmakers. Who, in other words, has “gotten it” more often than not in the John Calley or Steven J. Ross or Irving Thalberg sense of the term? And who has most distinguished him or herself in the opposite direction?
And not just who’s “gotten” it but who’s had the cojones to stand up the the Dark Siders and say “this is the right movie to make because it’s the right movie to make”? Especially the ones who’ve done this with the marketing guys saying “we can’t sell it!”
Greenlighting, advocating and selling the films that make the studio the most money is well and good and necessary, but this isn’t today’s issue. We’re trying to name the very best and the worst studio people in terms of who they are (or were), in terms of their visions and their souls. And they don’t have to be Boy Scouts or Girl Scouts. It’s okay if they’re shouters like Harvey Weinstein as long as their shouting has led to making great films.
It goes without saying that a studio chief who greenlights a McG movie or a film like, say, Marie-Antoinette can be on the best-of-the-best list, theoretically, but McG dermerits weigh very heavily on the collective soul of humankind and must be considered accordingly. It also goes without saying, as far as I’m concerned, that execs like Bill Mechanic (who called the shots on 20th Century Fox fare from ’96 to ’00, and who was allegedly canned over Fight Club), one-time Universal chair- man Tom Pollock, former 20th Century Fox vice-chairman Tom Sherak, New Line production chief Mike DeLuca and Disney production exec Nina Jacobson have to be on it. If not, say why.
Does Mark Canton, the Sony Studios production chief in the early to mid ’90s, belong on the all-time bad guy list…or has he been given a bad rap? (He greenlit some good films that came out after he left the lot.) And what about Lorenzo di Bonaventura? Brad Grey? Tom Rothman?
I could go on and on (especially about certain publicists and marketers) but I’m too cowardly to be honest about this because it’ll only get me in dutch. This needs to be a reader thing, for the most part. Okay, I’ll jump in with a few more good guys as the wheels begin to turn, but remember the list has to include only the worst as well as the best. Starting, let’s say, witih the year 1992. The last 15 years. No mezzo-mezzos or in-betweeners. And you don’t have to be writing from direct personal experience. Second-hand info and opinons will suffice.