It was big news last May but it’s common knowledge by now: Jane Fonda takes ownership of Paolo Sorrentino‘s Youth (Fox Searchlight, 12.4) in the space of a single, blistering six-minute scene with costar Harvey Keitel. Her character, a feisty Brooklyn-born actress named Brenda Morel, visits a swank Swiss spa to tell Keitel’s Mick Boyle, an aging director and longtime colleague who’s written his latest movie for her, that she’s decided to take a TV role instead of starring in his project. Movies are over, she explains, and so is Boyle — he hasn’t made a good film in too long a time. Brenda’s message is so corrosive and scalding that Mick…okay, no spoilers. 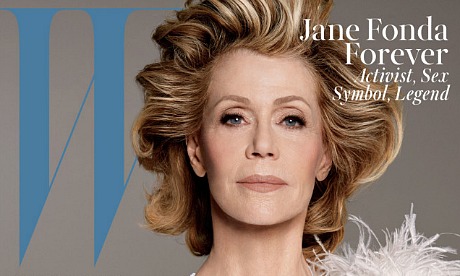 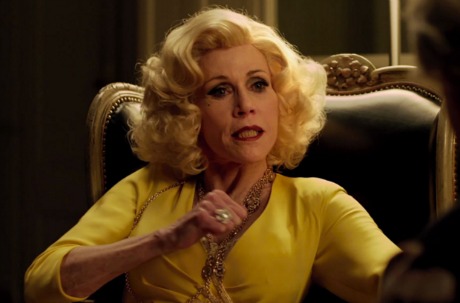 Adorned with an almost Kabuki-like appearance created by director Paolo Sorrentino, Jane Fonda as the Brooklyn-born Brenda Morel in Youth.

During yesterday’s smallish joint press conference for Youth, Keitel, perhaps momentarily allowing his impressions of Brenda Morel to bleed into reality, referred to Fonda as a “diva.” Right away Jane, three seats away with Rachel Weisz and Paul Dano between them, flashed him a look. Keitel: “I mean in a good sense…why are you making a face at me?” Fonda: “I don’t see myself that way but I’ll accept it, I’ll take it.” Keitel: “Well, you’re a legend, an icon.” (The banter happens at the 16-minute mark of this recording.)

I’d been sitting with this extremely attuned icon in a second-floor hotel room an hour earlier, and frankly feeling disappointed with myself for not preparing better questions. I had arrogantly concluded before driving over to the Four Seasons that I knew so much about Fonda and felt such a rapport with her (we were both raised by dismissive, emotionally aloof fathers and more or less educated ourselves, and I don’t know what else…similar cockatoo attitudes about food, a certain alertness of mind, a fill-the-schedule attitude?) that I felt I didn’t need to cram. Mistake. Always cram, always prepare.

But then I listened to the recording….hmmm, okay, not bad, tolerable. What can you accomplish in 15 minutes? Not much. Lightweight questions, banter, mild chatter.

During last Friday night’s Fox Searchlight holiday party I introduced Fonda to Alfonso Gomez-Rejon, director of Me and Earl and The Dying Girl, which Fonda had seen at last January’s Sundance Film Festival. She’d been up there with Lily Tomlin to promote their Netflix series, Grace and Frankie (Tomlin was also there for Grandma), and they impulsively decided to stay at the festival after their duties were concluded and see films. Fonda wound up catching 18, she says. I really respect that.

She says she might go again next January. She calls herself a “girl scout” in terms of keeping up and wanting to absorb anything new and happening. She has an engaging blog. She’s politically active. She has an Apple TV (possibly the new one) and watches movies on Amazon at home — a place in the hills that she shares with Richard Perry. She has the spirit, all right. And those big blues, man.

Every now and then you run into people you feel a special current with, and Fonda, for me, is one of them. Her aura is steady and…what, steely? A tough cookie. Tenacious, non-retiring, pays close attention. You have a feeling she’d be okay in an earthquake. If Fonda didn’t have a boyfriend and I were to run into her inside some cafe on Italy’s Adriatic coast…

The only dead spot in our conversation came when I asked if she’s recently seen any of her pre-Cat Ballou films on Amazon. Why did I ask a lame question? They were all duds, I know that, she knows that. What was my perverse point? I’m still scratching my head about that.

Here’s that riff I wrote after running into her in Santa Barbara four or five weeks ago. Again, yesterday’s conversation. 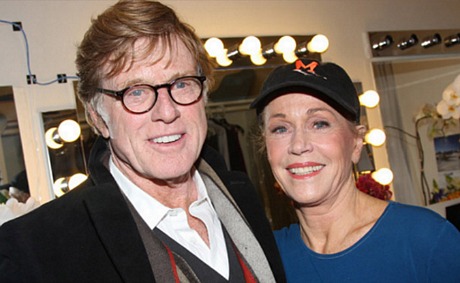 Fonda and Robert Redford are close to putting together a deal to shoot Our Souls At Night, a relationship film based on the same-titled Kent Haruf novel, sometime in late 2016. 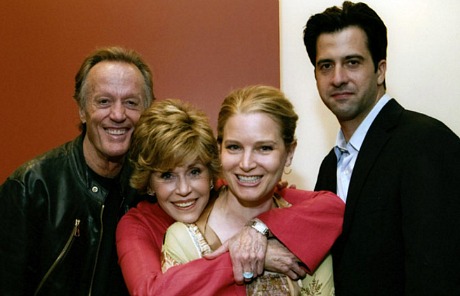 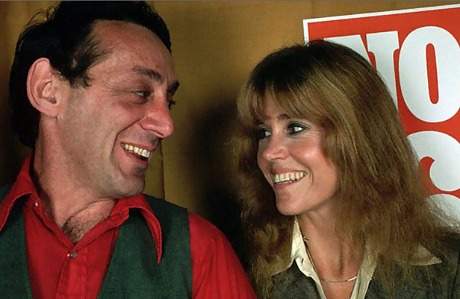 With the late Harvey Milk sometime in early or mid ’78. 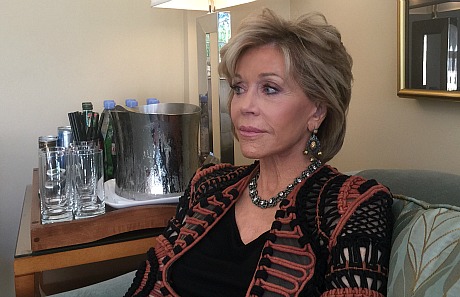 During our early afternoon chat at the Four Seasons — Monday, 11.16.