As of 9:56 am on Thursday, 8.12, Eat Pray Love has a 26% Rotten Tomatoes rating while The Expendables is running at 47%. Now, that’s just bizarre. And it’s not right. You can’t give either of these films an enthusiastic thumbs-up, but there’s no way Expendables rates higher than Eat by any fair application of Movie Godz standards. No. Effin’. Way. 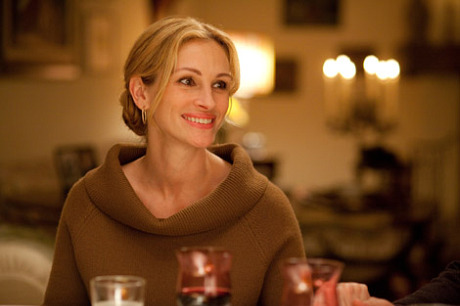 The best I can figure is that some critics have decided to ease up on the Stallone because it’s not entirely sincere about the ’80 machismo, and…I don’t know, are accustomed to hating on Julia Roberts and taking shots at the sense of entitlement and undercurrent of testy ego that she seems to bring to anything she does?

On a technical-expertise level at least, Eat Pray Love is miles above the Stallone flick. Eat is a take-a-bath-in-the-scenery movie with a watch-me-tearfully-emote performance within a story that feels too tidy and pruned-down. But The Expendables — make no mistake! — is a third-rate 1987 Cannon film. It’s bad fast food packaged in some neon joint on Western Avenue. Eat, at least, believes in high-end chefs and gourmet this and that. They’re in different realms, c’mon.

Eat Pray Love is less about the Elizabeth Gilbert book than about director Ryan Murphy being Julia Roberts‘ bitch and kissing her ass in ever shot and scene — okay, yes. But it’s a carefully crafted, nicely-made movie that at least aspires to some kind of character-based transcendence. It only works in spots, agreed, but the ambition alone contains a certain value. I’m giving it a C for overall delivery but an A- for effort.

Speaking as a former LSD Hindu, it’s impossible for me to condemn a movie that tries to convey spiritual matters on some level or in some fashion. It also deserves credit for its conveying the simple enjoyment of things, and its grappling with how difficult it can be to forgive yourself for stupid mistakes and to show vulnerability and openness when faced with the possibility of a bountiful new relationship, and all that jazz.

Does it feel nonetheless like a somewhat superficial Conde Naste Traveller thing, a taste of this and that spiritual hors d’oeuvre? Yeah, it pretty much does. But it’s reaching for more than what typical formulaic chick flicks provide. At least it’s making a stab. 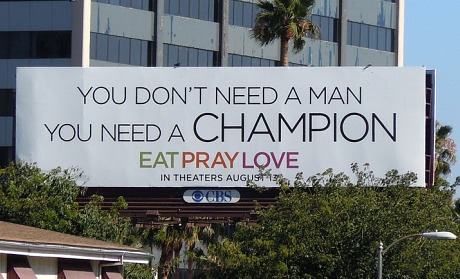 I didn’t like a lot of Eat Pray Love, and I confess to checking my watch about six or seven times, but I at least respect what it tried to do, and I know that anyone who says it doesn’t handle at least some things fairly well is just not being fair.

You can make fun of the fact that EPL has the general look, aroma, sound and vibe of a first-class ride made by the Ryan Murphy’s and Amy Pascal‘s of the world — people who live high on the hog and who have enlightened liberal attitudes about self-discovery. You can say that’s not enough and that the film is actually selling a kind of elitist elixir, but the song choices are nice (Neil Young!) and some of the dissolves and transitions are exceptional, and it has at least one exquisite scene about the eating of a sublime dish of fresh tomato pasta. And it has a great line about how guys never complain that much if the naked lady they’re making love to has a bit of a paunch.

Eat Pray Love can be a bothersome thing to sit through in certain…okay, more than a few ways. It’s tidy, shallow and “pretty” when it needs to be darker and quirkier and more exposing in terms of the unsavory or unappealing qualities that we all share. But it’s well cut and luminous and even shimmering at times, and — even the haters have to admit this — very well performed for the most part.

Ss much as I dislike who Roberts seems to be and my problems over the years with her affected acting style, she isn’t half bad in the Gilbert role. This may be the most genuine and deeply felt performance of her life. God, it almost physically hurt to say that!

As Roberts’ settled-down romantic interest (i.e., once she arrives in Bali), Javier Bardem stands and shuffles around on rock-solid terra firma, and shows serious heart and vulnerability. In one fell stroke he’s completely counter-balanced his No Country for Old Men bad guy. 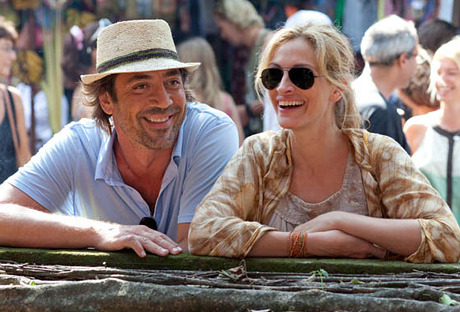 And there’s no denying that Richard Jenkins‘ performance as an older Texas guy with an alcoholic history, a grizzly fellow who initially speaks in glib bumper-sticker slogans whom Roberts meets in an Indian ashram, is solid and true and deeply felt. Especially in a big confession scene that he shares with Roberts on the roof of their ashram. I could see Jenkins winding up as a Best Supporting Actor contender. He’s always good. Maybe this is his hour.

Also entirely fine and sturdy are costars Billy Crudup, James Franco and Viola Davis. Not to mention the Rome, Indian and Balinese supporting cast members. Everybody holds up their end.

And so, ladies and gentlemen of the jury, Eat Pray Love is at the very least an expensively produced, technically assured, occasionally boring, Roberts-kowtowing, travel-folderish, middle-aged woman’s spiritual self-discovery flick that isn’t that great but doesn’t go down too badly either. In parts, at least.

I talked to a guy after last night’s screening who was furious and couldn’t get away from the theatre fast enough — he hated it! — but I know what this film is, and I know it’s not a total wash. It goes on too long (about 139 minutes), but the Rome section is awfully well done, I feel. I’ve been there three times, and I know what it can feel like at the right places and with the right people at the right times of day, and the movie gets that.

The only icky part was a section in which Roberts and a girlfriend visit Naples. I’ve been to Naples and it’s a total mafia shithole, trust me. So this part is a lie. Eat Pray Love also confirmed my prejudice about India as a land of dusty, trash-covered, over-crowded squalor with broken-down plumbing. I’m more determined now to never pay it a visit. Thank you, Ryan Murphy, for this if nothing else. 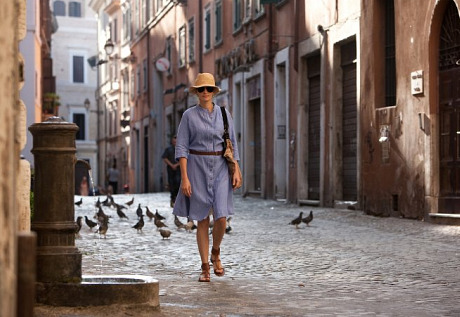