The MPAA’s decision to give Amir Bar Lev‘s The Tillman Story an R rating is not cool, but it’s not the end of the world either. Kids under 17 will be technically barred from seeing it, yes, but c’mon, guys — how many teens are ever interested in seeing any documentary about anything, even one as good as this? 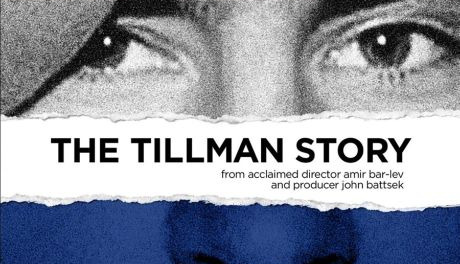 The MPAA’s decision is nonetheless grotesque.

The Tillman Story is about an orchestrated governmental obscenity that tried to exploit the memory of former Arizona Cardinals safety and U.S. Army Ranger Pat Tillman, who was killed by friendly fire in Afghanistan in 2004, for political ends. U.S. military and Bush administration officials initially floated a story that claimed Tillman was killed by Taliban troops, and that he died saving his fellow troops. Rah-rah, sis-boom-bah.

“Excessive language” is the MPAA’s reason for the R rating. They’re referring to three uses of the word “fuck.” It apparently matters not to the ratings board that each time the word is spoken with a sense of moral righteousness and/or outrage.

The first time Pat Tillman, Sr. quotes a letter he wrote to military investigators who’d bungled their inquiry into his son’s death. He ended it with this line: “In sum, fuck you…and yours.” The second time viewers are told the very last words of Pat Tillman, words he shouted just before being shot by fellow troops: “I’m Pat fucking Tillman!”

The third time Tillman’s younger brother is shown dismissing the notion that his brother is with God. That’s a nice idea, he says during a memorial serivce, but the truth is that “Pat is fucking dead.” Again — the “f” word used to express blunt despairing truth.

As always, context is everything. And sometimes the use of a vulgar word is absolutely the right thing. It’s appalling to consider that the MPAA is apparently too thick or obstinate to understand this.

“Of course there is excessive language,” said Tillman Story producer John Battsek in a statement. “This is a film that follows a truly exemplary family torn apart by the death of their loved one and the barrage of government deceit they encountered in their pursuit of the honest truth. We should be looking at this film as a way to show our younger generation the power of true family values and the sometimes unfortunate failings of our government.”

Bar Lev adds that “the language in this film is not gratuitous. I think this is how many people would react when faced with the unthinkable. Giving this film an R rating prevents young people from seeing this film; the very people who should be exposed to a great American like Pat Tillman.”

“This is one of the most important films I’ve distributed in my career,” says Tillman Story distributor Harvey Weinstein. “I want my teenage daughter and the nation’s young adults to be able to watch Pat’s story. We need to learn from this story and limiting who can see it is not the answer.”

Update: The R rating was yesterday upheld after an appeal.