The winner of the 2007 Best Picture Oscar is most likely going to be one of those Iraq War/Afghanistan movies. The national anguish over Iraq and terrorism and the Middle East (specifically over the American lives lost and the billons of dollars invested so far in wars and skirmishes in these areas) demands it, and I suspect that the Academy will want to say something passionate about that general tempest during an election year. It’ll be either Charlie Wilson’s War (1980s Afghanistan) or Lions for Lambs (recent Afghanistan) or In The Valley of Elah (recent Iraq War). 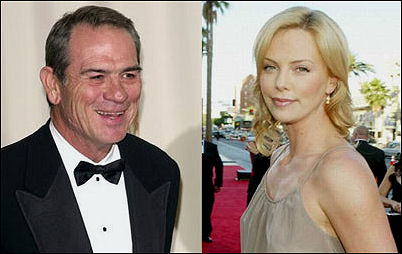 In The Valley of Elah‘s Tommy Lee Jones, Charlize Theron

Maybe. I don’t know anything but a voice is saying this. Then again it’s only mid June.
I’m repeating this prediction because MCN’s David Poland has posted a new list of Best Picture contenders, and of his eight favorites he’s got these three included. He may be on the money or not. But before we go any further he’s posted a wrongo as far as the release date of Paul Haggis‘s In The Valley of Elah (Warner Independent) is concerned. Around 4 pm Poland had it coming out on August 21st — it’s being released on September 21st. No biggie, everyone errs, etc.
Poland has Mike Nichols‘ Charlie Wilson’s War as a premature front-runner, but I’ll bet he’s been getting his ear bent about this thing by certain parties from over the hill so let’s take it with a grain. The buzz about Charlie Wilson’s War is, for now, mainly about the above-the-line roster — Nichols as director, screenwriter Aaron Sorklin, actors Tom Hanks, Julia Roberts, Philiip Seymour Hoffman, et. al. It’s possible that an anti-elitist backlash could kick in down the road. “Oooh, here come the blue-chip pedigrees with their important, highly-regarded movie…..stand back and make room for their titanic gifts and laser vision.”
A copy of the script of Charlie Wilson’s War has been sitting on my desktop for a long time now. All I know is that I can’t seem to make myself read it. It’s probably because I still don’t like that title. I think it’s a bad idea to call any film “[fill in the blank]’s War.” There have been films with titles like this before (The Private War of Major Benson, Murphy’s War, etc.). This is a close-to-ridiculous assumption given the scant information, but any such title always seems to imply that the main character will be manipulative, obsessive and egoistic…and who finds this possibility inviting?
That high-profile film I saw a couple of days ago is another Best Picture contender, for sure, but I’m going to keep the water in the bucket for the time being.
I haven’t said that Tim Burton‘s Sweeney Todd won’t take the Best Picture Oscar, but it won’t, okay? Trust me. For one thing it’s got the Poland curse hanging around its neck (any film being pushed for Best Picture by Don Tommasino has a certain historical karma going against it, and Poland has already pushed Johnny Depp for Best Actor), and for another thing Burton doesn’t “do” Oscar movies. He an expert at assembling eye-popping production-design movies with snarky-hip attitudes, but there isn’t any humanistic or redemptive uncercurrent in Sweeney Todd that rings true in an Academy way, so I wouldn’t bank.
Joel and Ethan Coen‘s No Country For Old Men (an epic and masterful film that may not finally be to the Academy’s liking…we’ll see), Robert Redford‘s Lions for Lambs, Terry George‘s Reservation Road and Shekhar Kapur‘s The Golden Age round things out for a total of eight.
What’s the wild-card movie that isn’t among these eight, but which should be?