During the L.A. Film Festival I spoke to John Michael McDonagh, the witty and easy-rolling director-writer of The Guard (Sony Classics, 7.29). And now I can’t find the effing transcript. But you don’t actually need to speak with McDonagh (although he’s pleasure to chat with and I’d love to raise a glass with him some day) because The Guard says it all.

McDonagh (the brother of playwright and In Bruges screenwriter Martin McDonagh) is operating here in a sort of Quentin Tarantino-ish realm. The difference is mainly one of regional idioms. Tarantino is a dispenser of American criminal-class attitude, and McDonagh is a master of Irish ramble-on digression.

But it’s really about the art of inspired chit-chat and hardly ever sticking to the point. It’s basically a movie that says “Look, we have to do this sort-of cops and bad guys thing because you need a story of some kind, right? But let’s mainly have a little fun with some spitballs and in-betweeners and side-pocket shots. Because that’s where the elevation is.”

It’s a bit early to calling Best Actor shots, but Gleeson’s performance as Sergeant Gerry Boyle ought to be lock for one. It’s the best role of his career, hands down.

It really should mean something to the online movie community when a film has a 100% Rotten Tomatoes rating, as The Guard does now. Very, very few films achieve that number.

What will this mean box-office-wise? Perhaps not much because Walmart crowd doesn’t read reviews and probably feels a little funny about paying to see a movie about an whimsical Irish fat guy and a deadly earnest, somewhat testy-mannered FBI guy. The determinations of the Walmart crowd can be breathtaking at times. They’ll face a firing squad before paying to see one of the most entertaining films of the year, hands down.

Last month I wrote that “when the kids were toddlers they’d call a film like The Guard ‘a talking movie.’ People sitting indoors and playing verbal ping-pong, etc. But what talk! What delicious Irish ping-pong!

“The Guard is a loose-shoe, Guiness-slurping thing that’s simultaneously digressive and twinkle-eyed, and one of the best ‘cops and bad guys batting the ball around’ movies in ages. I don’t know if this indie Irish production will be eligible for a Best Original Screenplay Oscar, but it ought to be. It’s all dessert.

“I had a little bit of trouble hearing all the dialogue when I first saw The Guard at Sony Studios (Jimmy Stewart, room #24). Irish-speak has a certain gliding, looping, burry sound that can you can lose the ear for if you’re not careful. It’s a little like Shakespeare — once you find it you can hear it, but you can fall off the track if you’re not careful. In any event I heard every syllable during [an LAFF] screening at the LA LIVE Regal. I think it was because the sound sounded a bit sharper and cleaner.” 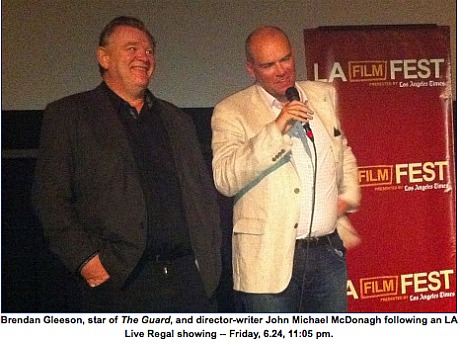