The calibre of Robin Wright Penn‘s performance as Mary Surratt, the rooming-house operator who was wrongly executed for allegedly conspiring with John Wilkes Booth and others to assassinate Abraham Lincoln, is unknown. But last night I read a shooting draft of James Solomon‘s The Conspirator, the Robert Redford-directed drama about Surratt’s trial, and it’s obviously a sturdily-written, high-calibre thing. And there’s no missing the grace and gravitas woven into Surratt’s character. 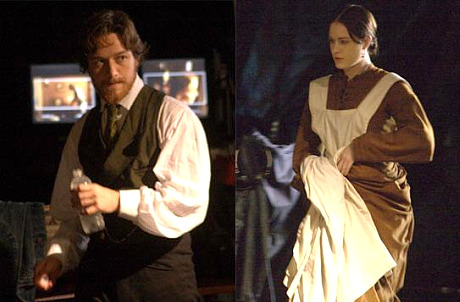 Half the work has been done, I’m saying, for Penn. All she has to do is play Surratt in a straight and solid manner, and she’s got a Best Actress nomination all but sewn up. If, that is, The Conspirator lands a distributor (which it almost certainly will) and comes out in the late fall or early winter, and gets a good campaign going, etc.

Redford may or may not have have peaked as a director (his last seriously strong film was ’94’s Quiz Show), but he’s always been good with actors. I’m basically saying that Solomon’s script is so fundamentally solid that all Redford has to do is get the period details right, shoot it handsomely and let his quality-level cast do what it does best, and he’s pretty much home free.

The Conspirator could land with a thud — noody knows anything at this stage — but if Redford gets it right I’m guessing we’ll see Penn competing against Anne Hathaway‘s performance in Love and Other Drugs for the 2010 Best Actress Oscar. 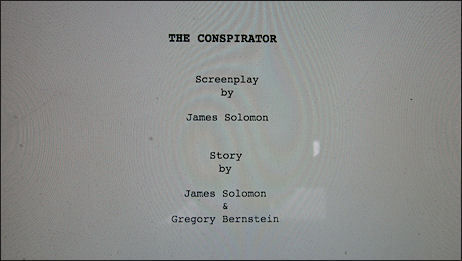 The basic plot of The Conspirator involves a young attorney (James McAvoy) being reluctantly assigned to defend Mary Surratt in his conspiracy trial. The main arc belongs to McAvoy — he starts out actively hostile, but comes to see that Surratt has been wrongly charged. But Penn, it appears, will provide the lump-in-the-throat moments.

Solomon (who used to work for Barry Levinson) shares story credit on the screenplay with Gregory Bernstein. The Conspirator‘s director of photography is Newton Thomas Sigel (Valkyrie, Leatherheads, The Brothers Grimm, Three Kings). 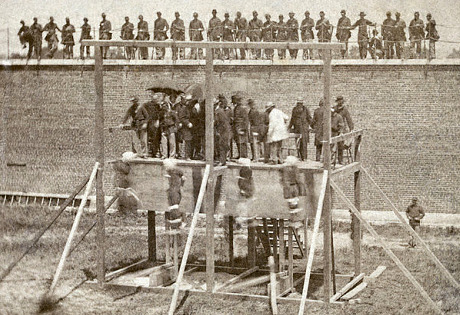 Aftermath of execution of Lincoln assassination conspirators; Surratt’s body is on far left.