Focus Features’ decision to open Anton Corbijn‘s The American — the Italy-set, George Clooney-as-a-secret-assassin drama — on September 1st means they primarily regard it as a sophisticated high-end thriller and that’s all. If they saw it as having any kind of award-season potential they would obviously open it via Telluride, Toronto and Venice, but a Labor Day opening is almost the same thing as a mid-August debut. 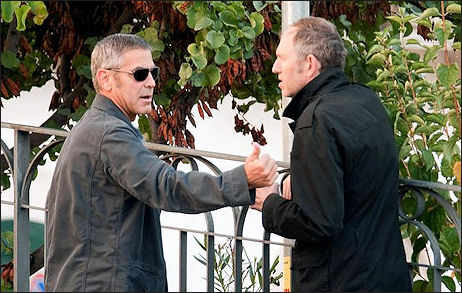 “It’s just a cool-ass adult popcorn movie,” Focus seems to be saying. Which is also a roundabout way of saying “if a 2010 Clooney film is going to attract any awards heat, it’ll be Alexander Payne‘s currently-shooting The Descendants….if it comes this year, that is.”

Rowan Joffe‘s American screenplay is based on Martin Booth‘s “A Very Private Gentleman,” which had its paperback release in ’05.

Consider this Publisher’s Weekly synopsis: “Booth’s brilliantly creepy psychological suspense novel follows a so-called ‘shadow-dweller’ (a technical weapons expert who creates and supplies the tools for high-level assassins) to a rural village in southern Italy where he poses as ‘Signor Farfalla,’ a quiet artist who paints miniatures of butterflies and has traveled to the area to capture a unique native specimen.

“As the artist, whose real name is Clark, settles into the local scene, most of his new acquaintances accept his enigmatic alias, with the notable exception of Father Benedetto, the priest who pushes him to reveal himself in a series of confessional conversations over glasses of Armagnac. Between painting the minutely detailed butterfly studies and preparing for his next job, Clark carouses with a pair of local prostitutes, Dindina and Clara, eventually slipping into a serious affair with the latter.

“As he gets weapons specs and begins constructing a new gun, he learns that his latest customer is a woman whose next target may be Yasser Arafat. Suddenly he senses another ‘shadow-dweller’ on his trail; this anonymous figure remains a mystery to Clark until their climactic showdown. The lazy, languid setting is an eerily effective backdrop for the fresh and beguiling murder intrigue, and the flashbacks into Clark’s cold, brutal past are cleverly juxtaposed against his budding romance with young, naive Clara.” 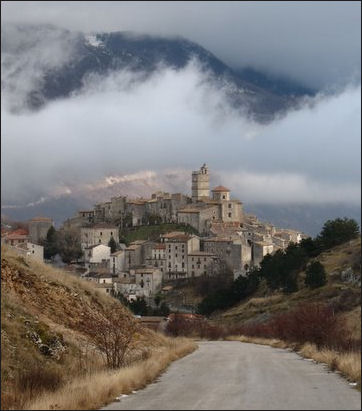 Clara is being played by Italian actress Violante Placido. Father Benedetto will be performed by Paolo Bonacelli.

“With first-rate characters and a gradual buildup of suspense, Booth constructs his most focused, tightly written novel to date, reminiscent of William Trevor‘s classic ‘Felicia’s Journey’ and the late Patricia Highsmith‘s Ripley novels.”

For me, Martin Ruhe‘s black-and-white photography of Corbijn’s Control was the stuff of legend — it was the most deliciously composed monochrome film since Gordon Willis‘s Manhattan. Ruhe also handled The American‘s widescreen (2.35 to 1) color cinematography.

The American shot for 33 days last fall in Castel del Monte, a commune in the province of L’Aquila in Abruzzo, Italy.