It is hurtful and degrading, I feel, to evaluate the sexual attraction levels of humans like a trade critic might evaluate the features of a new car or cell phone, but since Ashley Alexandra Dupre (a.k.a. Ashley Youmans), otherwise known as the prostitute who spent some private time with former New York governor Eliot Spitzer, being in the business of offering her sexual wares for big money, I want to clarify a point I made yesterday, which is that her nose is too big. 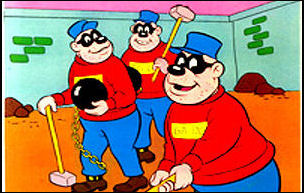 She has a kind of Beagle Boys nose, which is to say a nose that looks a tiny bit canine. If a professional cartoonist was to draw a charicature of Dupre, he/she would almost certainly give her the same kind of black-tipped dog nose that Disney’s Goofy character had. Many cartoonists, in fact, have used dog noses.
I have one other comment. If I were a john about to pay $4500 for her services, which, in my mind, should result in the company of a woman with the most exquisite and delicate Michelangelo features imaginable (i.e., Kate Moss-level), I would also have concerns about her fingers, which are too thick. I’m not the first person to use the term “thick-fingered vulgarian,” but it’s a physical distinction everyone is familiar with. Refined, upscale, top-of-the-line women don’t have thick or semi-thick digits, which come from being big-boned in general.
I wouldn’t say this unless we were talking about a woman in the trade. AAD is currently famous in part because of how she looks and, of course, her willingness to offer intimacies for money, so I think it’s fair, this one time, to offer views on this topic. Full disclosure: I’ve never paid for the company of a pro in my life, although it’s hard to argue too strenuously with that famous Robert Towne line in The Last Detail, spoken by Otis Young: “Any [female intimacy moment] you get in this world you’re gonna have to pay for, one way or the other.”

March 13, 2008by Jeffrey Wells34 Comments
« Previous post
Titles in a Tight Box
Next post »
A Test of Character