If you’ve seen Jackie Brown, you know Quentin Tarantino is a big fan of Barry Shear‘s Across 110th Street (1972) — a tough, violent, above-average blaxpoitation flick that costarred Yaphet Kotto, Anthony Quinn and Anthony Francioca — because he used the “Across 110th Street” title song, written by Bobby Womack and J.J. Johnson and performed by Womack, over Brown‘s opening credits. 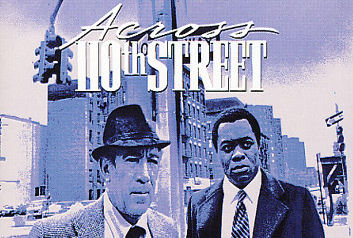 And now it turns out Elvis Presley was right on the same page. In an excerpt from Jerry Schilling‘s “Me and a Guy Named Elvis” that appeared on “Page Six “, it says that Presley “celebrated his 41st birthday by telling friends about Across 110th Street, which apparently was his “favorite blaxploitation flick.” The King “began to act out the whole movie, setting up each scene and then presenting just about every line of dialogue in the script. He brought each character to life with walks, vocal mannerisms and the subtlest of gestures. [He] didn’t stop until he got to the final scene of the film.”