It only took me five weeks to finally watch John Patton Ford‘s Emily The Criminal, which is pretty close to being as good as I’ve been told. It’s not crazy-holy-shit good but good-good, and there’s nothing wrong with that. It’s basically a realistic and wholly unpretentious small-time crime film…no muss or fuss and down to business. But it’s only moderately involving at first. It takes a while to get there.

Aubrey Plaza is suitably fierce and guarded in the title role, a debt-ridden 30something in Los Angeles who gets involved with a phony-credit-card ring. At 93 minutes Emily takes a good 45 or 50 to really put the hook in and get moving, but the last 35 to 40 minutes are quite exceptional.

An expert actress who always invites you in and tells you what’s up, Plaza delivers a pro job as Emily. I really loved her moments in which she was angry and alarmed, and especially a “cut the bullshit” job interview scene with Gina Gershon.

Plaza is one of the producers (along with Tyler Davidson and Drew Sykes) but you know who’s also quite arresting and compelling? Theo Rossi, who plays Youcef, Emily’s mentor-in-crime and later her lover. I’d never paid attention to this guy before, but I will from here on. There’s one moment towards the end when Rossi disappointed me, or his character did rather. I won’t get into it but you have to watch your back.

Emily’s arc is what makes the film fascinating — she starts out as an almost listless, half-invested scammer who’s basically an in-and-outer, but the more criminality takes over her life the stronger and tougher she becomes. By the end she’s almost become a version of Neil McAuley or Michael Corleone at the end of The Godfather. The film basically says “theft and criminality is its own buzz, but you have to become a kind of fierce animal to really survive in this realm…you have to convince others that you’re scary when crossed so they’d netter not fuck with you.”

One reason I didn’t get to Emily before last night was that it’s still not streaming. I’m sorry but it didn’t strike me as worth $18 or $20 plus popcorn and whatnot, and it’s not like it’s playing in a lot of theatres. 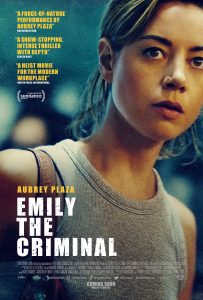