At what point can The Woman King, which cost $50M to produce and another significant chunk of change to sell, be considered profitable? Theatrical revenues are, of course, just one aspect of the overall revenue stream these days, and The Woman King hasn’t really opened internationally yet. But right now the worldwide earnings after the second weekend are around $37.5M. Not bad, I guess, but not earthshaking.

The film has nonetheless connected to a decent or moderate degree. Will it end up as a break-even, which is to say earnings of well over $100M (as you do have to add marketing costs)? You tell me.

Right now I would describe The Woman King, all things considered, as a modest, respectable success. That’s fair, no? A friend says that “given its budget and lack of star power, it was never meant to break the bank. But it’s done quite well.” Sure, no arguments, respectable showing.

But this morning I looked at the Woman King audience scores on three aggregate sites — Rotten Tomatoes (99%), Metacritic (2.5%) and IMDB (6.1%). And the evidence seems clear (or strongly indicates) that the Rotten Tomatoes gang has “cooked the books” as far as The Woman King‘s audience score is concerned. With the other two aggregates reporting much lower audience reactions, what are the odds that RT’s 99% score is trustworthy?

Not even Goodfellas, which everyone likes or admires, has managed a 99% audience score.

Three days ago (9.22) Evie‘s Gina Florio took note of this incongruity. Her article is titled “There’s Speculation That The Woman King Audience Score And Reviews On Rotten Tomatoes Are Manufactured.”

Florio links to a Twitter dude named @fatherquads, who believes that a faction within RT is indeed posting fake audience numbers.

“The [RT] profile claims to have 99% audience score, and over 2,500 verified reviews,” he tweets. “The only problem is that [the blurbs are] all short, posted soon after one another, and don’t talk much about the content of the movie, rather how much of a YAS SLAY QWEEN Viola Davis is.”

Friendo: “RT is a totally corrupt and despicable entity that I’ve loathed from day one and never pay the slightest attention to. Their data is mostly meaningless (or so obvious that it tells you zilch). ‘Interpreting’ RT tells you nothing. And who cares what demo The Woman King is appealing to? Who cares what action fanboys think? The fact that black women had an action film to call their own is, I would say, a good thing. I mean, why not?” 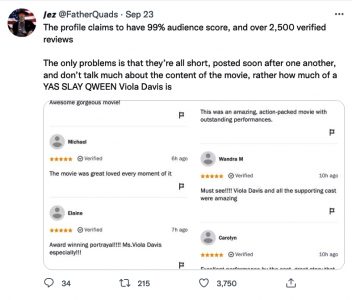 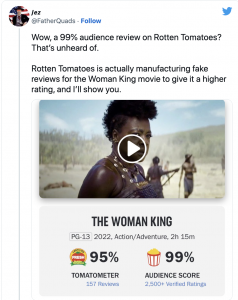 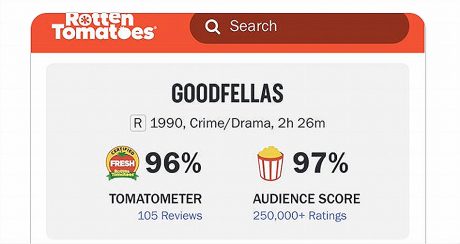