Marshall Fine recently ran a piece that basically said there were plenty of shit-level movies released during the 1970s, which is mainly regarded, of course, as one of the most creatively fertile and exciting eras in Hollywood history. There are bad ’70s movies you can find online (The Concorde: Airport ’79 or Midas Run) and there are ’70s films so tedious and obscure that they’ve been wiped off the face of the earth — no one’s even heard of them. I’m going to stick my neck out right now and declare that I’m the first movie journalist to even mention Quentin Masters and Don Mitchell‘s Thumb Tripping (’72) in the 21st Century and perhaps for the last 30-plus years. Well, am I? 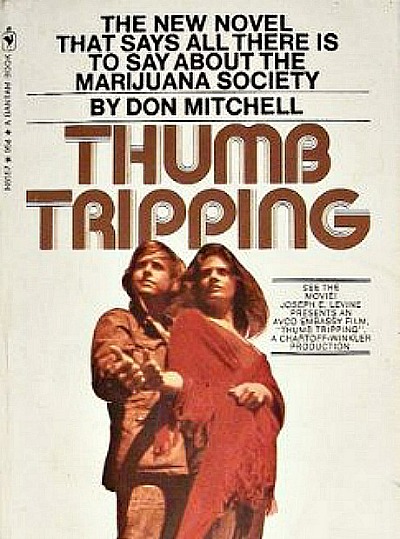 Thumb Tripping was basically an exploitation film about young innocent hippie types hitchhiking around and getting roughed up and traumatized and occasionally having sex with whomever. It costarred Michael Burns (Robert Altman‘s That Cold Day in the Park) and, in her first theatrical film role, Meg Foster. It also featured — wait for it — Bruce Dern. It was co-produced by the otherwise respectable team of Robert Chartoff and Irwin Winkler, and was exec produced by Joseph E. Levine. I saw it at either the Westport Country Playhouse Cinema in ’76 or ’77 or at the Bleecker Street Cinema sometime around ’78 or ’79.