A few cynical cheap-shotters wrote yesterday that the excerpts of Stanley Weiser‘s W script, provided yesterday in an ABC News article by Marcus Baram, led them to wonder if this was some kind of April Fool’s joke. These guys are monkeys, in my opinion, and they need to reel it in. Or better yet, consider what Weiser wrote this morning in an e-mail and what I wrote back. 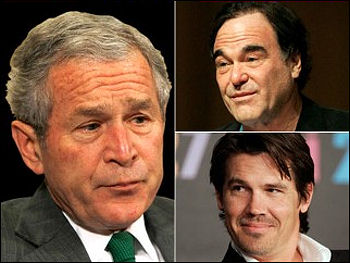 “I’m glad that you see the potential in W,” Weiser began. “As the writer of the script, you saw an early draft. The ABC News piece only pulled out the whacky sensationalistic points from that draft, as you know.
“I’m also glad you nailed Ari Fleischer‘s denial of Bush talking about kicking Saddam’s motherfucking ass across the Mideast because this was sourced directly from Michael Isikoff’s book, Hubris.
“A few of your cynical readers think this is an April Fool’s joke. So will others in ten years, three trillion dollars and thousands more dead when they look back at this fiasco.”
“Thanks for your note,” I wrote Weiser back. “I’m constantly irked by some of those little right-wing bitches and cheap cynic contrarians who write in response to various Hollywood Elsewhere pieces. The draft I read might be an early stab, but I’ve gone over the 10.15.07 W twice now and it’s a lot deeper and fuller than it seems at first. It’s tightly written and clear of mind — everything is very choice and precise, and it never wavers from its focus.
“The general reaction has been ‘is that all there is’? In other words, because it’s an Oliver Stone movie, people want some kind of ‘holy shit!’ lightning-bolt element …and they feel this isn’t that. What they’re reading, instead, is a well-honed portrait of who this guy is, what’s driven him, what he’s always wanted, how he’s gotten to where he is, and what the central themes of his life seem to be (i.e., the drag-downs and the uplift).
“But in the modesty of this approach there is serious virtue. The more I thought about it, the more I liked the script precisely because it’s not wild-ass, because it really seems to have its ducks in a row and is carefully shaped and ordered, because the dialogue is very tight and pruned down, because you seem to have captured Bush’s speech style perfectly (or so it seems to me), because I believed each and every line.
“Not once did I sense the presence of Hollywood far-left liberals getting off on skewering Bush because it’s in their blood and it makes them clap their hands and say yeah. I sensed a real submission to documented or reliably sourced fact. I say this having only read Bob Woodward‘s two books about the Bush White House, but you seem to have done your homework.
“Yesterday Chris Matthews said during the news-review section of Hardball (in reaction to Baram’s ABC News piece) that “this being an Oliver Stone film, don’t expect a rigorous adherence to the facts” or words to that effect. Whether each and every line is precisely sourced or not (which would surprise me — a writer has to have a little leeway to make a script feel organically human and alive), this is precisely what I got from this 10.15 draft, that I’m reading a heavily-researched, straight-dope recounting.
“Boiled down, W is a cogent dramatic summary of the significant chapters and stages in the life of an aw-shucks, smart-but-dumb, silver-spoon fratboy who, like all of us, has had his issues and limitations and hang-ups and challenges to deal with, but nonetheless managed to grow into a donkey demagogue of the first order.
“I can’t wait to see what Josh Brolin does with the role. And I keep seeing Richard Dreyfuss as Cheney. And I love the mention of Cats being Bush’s favorite stage musical. (Cats…asshole! He probably loves Mamma Mia also!) And the metaphor of the fly ball at the very end is just right.”