That May 4th letter from Transformers: Revenge of the Fallen director Michael Bay to Paramount honchos that TMZ posted earlier today is instructive because it tells you that Bay isn’t all that highly educated, or at least didn’t pay attention during English composition class in high school. 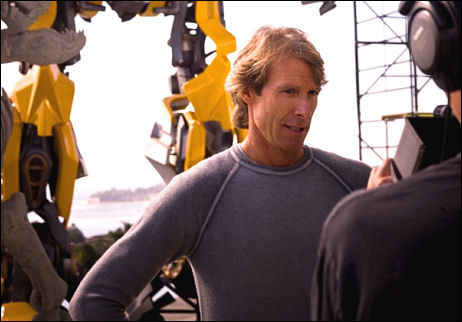 Michael Bay on set of one of the Transformers films — doesn’t matter which one.

Content-wise it shows that he was angry that the Transformers sequel (out 6.24) wasn’t getting decent buzz. Maybe it wasn’t at the time and “no big deal” anyway — we all get angry and complain, etc. But the seventh-grade spellings and thoughtless, sloppy-ass sentence construction speak volumes.

But I like one portion of the letter because it shows that Bay understands pop-culture currents, that he doesn’t want to repeat mistakes, that he listens to Jerry Bruckheimer and can read the writing on the wall: “You all say it doesn’t matter,” he writes. “Everything matters! The first time any studio said this very thing to me was on The Island.

“Over the years Jerry Bruckheimer mentored me on event movies, [and] he had a mantra. ‘A studio that does not make it into an event [or] will it into an event [and] thinks the audience will just show up will always be bitten in the ass.” I love this line also: “Clips don’t blow people away!”