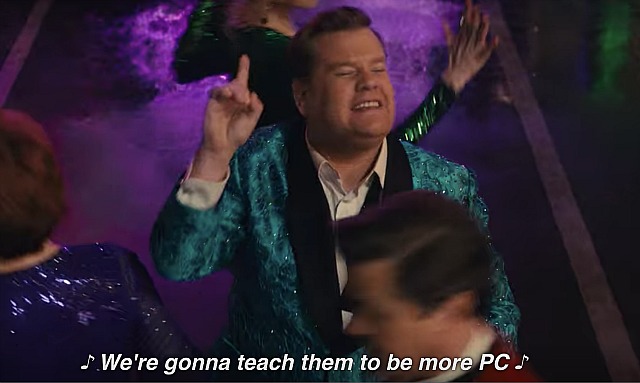 HE: By the way I like Emma (Jo Ellen Pellman) and her girlfriend (Ariana DeBose) very much. I like them as much as I hate the p.c. Broadway quartet.

Friendo #2: This isn’t the world we live in anymore? Sorry, but I really don’t think that’s true. The movie makes the point that the legal case against a gay couple at the prom is a non-starter. That’s why it’s resolved so quickly. But the social pressure? In small-town Middle America? You think that right now, there aren’t tons of gay high schoolers in places like Indiana or wherever who are still closeted because they’re too scared about what the reaction would be?

Friendo #2: I’m not talking about Trump!! I’m talking about Middle America. There are tons of prejudices there. Hell, there are tons of prejudices in New York City. Before moving west I lived in downtown Manhattan for over 20 years, and I frequently saw gay men in the Village walking down the street holding hands. I’ve seen it hundreds of times. In all the time I lived here, I never — not once! — saw two gay men walking down the street holding hands on the Upper West Side. Why not? What’s the difference? Here’s the answer: They didn’t feel comfortable. Not even on the fucking Upper West Side of Manhattan. That should tell you something.

Friendo #1: And I get that. But feeling uncomfortable is different from an entire school treating one gay character like that. What do you think drives cancel culture? Every single one of these kids would be harassed on social media — doxxed and publicly humiliated. They would NEVER risk it. Even if they felt uncomfortable there is ZERO CHANCE — ZERO that they would put her through that. They might object and not attend but they would not move the prom and not tell her. I just call bullshit on that considering we live in a time when people are persecuted for making hand gestures at stoplights.

Friendo #2: Once again, The Prom uses a stylized plot. A stylization of a feeling. You’re saying, “In real life, this couldn’t happen.” But in a different way you could use that very same argument against, I dunno, Ocean’s Eleven. “No heist would ever be staged like that!” Well, yes, duh! It’s a heist film! A delirious farfetched crime fantasy in movie form. Certain films we want to be realistic. Certain films need to be realistic. If Steven Spielberg‘s The Post or Nomadland fail the reality test, then they don’t work.

HE: I believed every last detail of Rififi through and through.

Friendo #2: The Prom is a stylized, purplish, knowingly over-the-top musical. It has the right to its mythological good-vs.-evil plot. It’s not a documentary about Trump Land.

Friendo #1: Agree. I just found it too woke propaganda for my taste. But like you I was moved by the two young leads. It’s a fine film, not offensive or anything. Just not my bag.

HE: This is a caring, kind-hearted film with a good message and a good heart. Nonetheless the four words that keep popping into my head are obnoxious, overbearing, often numbing. Maybe it worked better on-stage. It probably did. But Indiana…you know. Jeff to Emma: Proms aren’t important. Indiana isn’t important. Forget about it. Leave town and be free.

Friendo #1: In 2021 you have a massive machine of celebrities and Twitter to swarm your attackers. You are not the marginalized one in 2021. You are the celebrated one. That is why it is ultimately bullshit. It is telling the left what it NEEDS to hear to justify its position as marginalized — for years now this is what gets the most attention and support online — gay or trans. Whether Indiana or California or Texas — this is the kind of thing the left LIVES for, searches for day in and day out — a chance to shame people who discriminate. So it is a fantasy. It is WOKE PORN.

HE: The songs are catchy. But the Fosse song, “Give It Some Zazz”…later. (minutes later) So everyone’s personal history and problems and blockages are going to be solved? This is dragging on. You know what musical in this vein that I found tolerable? “Kinky Boots.” Why? Because I saw it on stage. And with Harvey Fierstein in the audience!

Friendo #2: Yes, everyone’s problems are going to be solved, and everything comes out more or less right for everyone in the end. It’s called…a movie!

HE: Emma and James Corden…a match made in heaven. Corden is the gayest straight performer who ever lived. (minutes later) Good God, this film has been running for 1:40 and there’s another half-hour to go? I’m sinking. So there were two proms, and now there’s going to be a third?

Friendo #2: I watched it till 3 am, and was pretty tired, and I honestly thought it flew by.

HE: Okay, my heart melted. I fell for it. I like what is is, what it’s generating, what it stands for. I’m glad it’s out there. And yes, it’s aimed at Middle American schmucks. But altogether it’s soooo exhausting and drawn out. It kills you with the alpha-preach. It happily and joyously suffocates you to death.

I texted my son Jett with tears in my eyes during the last 15, 20 minutes. I told him it breaks my heart to think of him walking to the NYC-bound train station in West Orange, which is about 1.8 miles from his new home….it kills me to think of him freezing his ass off in February as he walks back to the house, pushing his bike uphill. I told him to think about buying a beater car, a station car. (He could get a piece of shit for $1K.) “Dad, really…I’m fine,” he insisted. “I’m not a pussy about the cold.” I, on the other hand, am a total shuddering CANDY-ASS when it comes to Arctic temperatures.

Anyway, the tears were inspired by The Prom.…I’m almost ashamed to admit that, but they were.

Friendo #1: This has been a very surreal email thread. Jett can Uber on really cold days.

Friendo #2: This has been one of my favorite email exchanges of all time. And Jeff, the fact that you could start off hating the film like you did, for as long as you did, and then still give into it — that is the mark of an open mind. I’m truly impressed. Oh, and I’m also a candy-ass about the cold. I can’t stand it. Can’t wait to see how you tie it all together in your post.

December 1, 2020by Jeffrey Wells10 Comments
« Previous post
As Gently and Precisely As Possible…
Next post »
Edison Knew. Do You?