Early this morning Scott Feinberg posted a Hollywood Reporter analysis piece about the Toronto-vs.-Telluride, bruised-ego, us-or-them war, which was initiated by TIFF’s Cameron Bailey and Piers Handling. The conflict began with their Al Capone-style policy, announced last January, that said (a) if producers or distributors want a prestigious slot during the Toronto Film Festival’s first four days, they can’t sneak their films in Telluride first…like it or lump it, and (b) if they do travel to Telluride first they’ll be punished by having to wait until the fifth day of TIFF (i.e., Monday, 9.8) to show their films. That or they’ll be classified as a “Canadian premiere,” which might be another kind of demotion…I think. 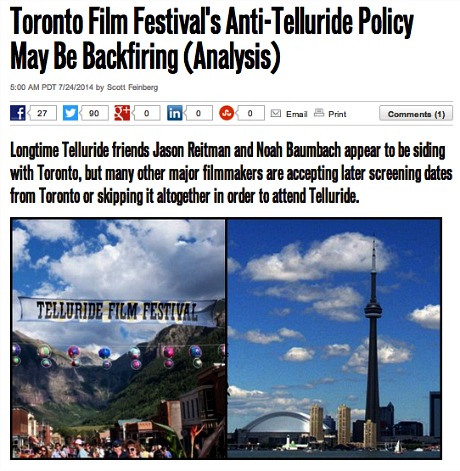 Feinberg is reporting that Toronto’s tough new rule has to some extent backfired, and that a lot of producers and distributors are pissed off. “Many — including even Canadian filmmakers — are calling Toronto’s bluff by heading to Telluride first and either accepting a later Toronto screening date or skipping Toronto altogether,” his story states.

“Regardless of where their films will be playing, the distributors with whom I’ve spoken agree on one thing: they are angry at Toronto for forcing a choice in the first place.

“While most understand Toronto’s frustrations with Telluride, they also insist that Telluride poses no threat to Toronto, since only a relatively few people see the films in Telluride. Conversely, Toronto, by enacting this policy, clearly intends to pose an existential threat to Telluride, which is a fest beloved by distributors and filmmakers for its small and highly selective lineup and casual, low-key, red carpet/paparazzi-free vibe — not to mention the considerable turnout of Academy members that it attracts (which is sizable enough for the Academy itself to host a party for its members at the fest).

* “There is a widespread sense, among those with whom I spoke, that film festivals should be in the business of celebrating films, not punishing them.”

* “One practical implication of Toronto’s new policy is that it makes it much more expensive for a distributor to send a film to both fests. Smaller distributors have long opted to put their artier films, as well as foreign films and docs, on the ‘Telluride-Toronto circuit’ because both generate advance buzz that films of that sort need. But, under the new policy, a film that plays at Telluride might have to wait as many as 16 days before screening at Toronto — that’s presuming it plays on one of the first nights in Telluride and one of the last in Toronto.

* “How does Toronto’s new policy serve film and filmmakers, which is supposedly a — perhaps the — primary objective of film festivals? The widespread feeling among the distributors and filmmakers with whom I spoke seems to be that Toronto’s organizers have allowed their pride and egos to influence their policymaking, hurting films, filmmakers and their own event in the process.

* “Tom Bernard, co-president of Sony Pictures Classics, recently gave an interview to the Toronto Star newspaper in which he was highly critical of Toronto’s new policy — which he called ‘imperialistic’ — and suggested an alternative solution: Toronto could make available its four premier theatrical venues — the Ryerson, Elgin and Princess of Wales theaters and Roy Thomson Hall — only to true North American or world premieres, and screen other films at its other venues, such as the Bell Lightbox. That seems like it should be punishment enough for a distributor daring to show a film somewhere prior to Toronto, but it apparently was not.”