Posterwire.com is announcing that The Weinstein Company is running a movie-poster design contest to create a poster for Factory Girl — not with the idea of putting the winning entry in theatres, mind. I guess that means this is basically a meaningless chickenshit idea, but at least there’s ample precedent. “No major film studio has ever run a contest to design a movie poster where the winning entry was used as the domestic theatrical one-sheet for a film key art ad campaign,” the site explains.” 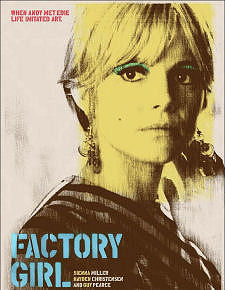 And yet the one-sheet that the Weinsteiners are going with isn’t very good, so maybe they should consider using one of the submitted entries. I’ve seen a rough version of the film, and while the Andy Warhol-ish silk-screen design of the one-sheet is effective, Sienna Miller‘s facial expression is neutral and stoic — which is totally at odds with what her performance as Edie Sedgwick is like. In the first half she’s jittery, impish, playful, teasing and crazy-girl plucky, and during the last third she’s on the downswirl and wiped out, her face full of stress and streaked with running mascara. In short, the Weinstein poster is a flub — a bland and pointless lie.