“Until I was ten years old, I lived an everyday life full of monsters….having lucid dreams at night in which they became real. As a Mexican I’ve seen my share of weird shit, and this has made me believe in monsters as really tangible, corporeal entities. To me monsters are real. I think they’re creatures of the spirit, and they live in a place deep within us where angels and demons dwell. And to me they are part of my spiritual life, as much as a Christian would accept Jesus into his heart. I accept monsters.” 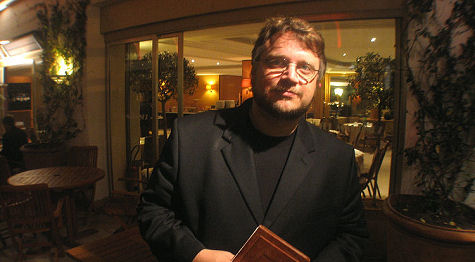 This is one of the better quotes from my chat earlier today with Pan’s Labyrinth director-writer Guillermo del Toro. I’ve known Guillermo since the mid ’90s — he’s one of the few filmmakers out there for whom I feel a genuine kinship and a sem- blance of real friendship — and I feel that he’s exceptionally wise and gifted and perceptive as hell. This is a commonly held view. He’s an old soul, endlessly generous, compassionate, insightful and possessed of a brilliant wit.
You can hear this in his voice, in his elegant phrasings and choice of words. The guy would kill on The Charlie Rose show.
< ?php include ('/home/hollyw9/public_html/wired'); ?>
I asked Guillermo right after he said the above if he has any conventional religious feelings. “I’m a lapsed Catholic, but, as they say, once a Catholic, always a Catholic,” he answered. “As Luis Bunuel once put it, ‘I’m an atheist….thank God.'”
These are good times for Guillermo and Pan’s Labyrinth, which I feel is his best film ever. It is not, as he calls it, one of his “Ritalin movies” — Hellboy, Mimic, Blade 2 — but then I’ve always been a bigger fan of his quieter, more socially grounded films like Labyrinth and Chronos and The Devil’s Backbone. A lot of film critics feel the same way. Last weekend Pan’s Labyrinth was named Best Foreign-Language Film by the Boston Film Critics, the San Francisco Film Critics Circle and the New York Film Critics Online. 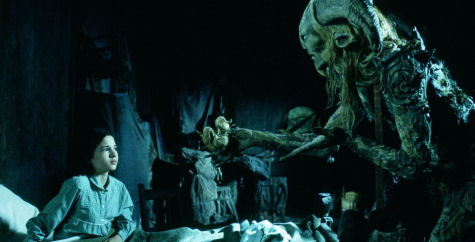 Like The Devil’s Backbone, Pan’s Labyrinth is half-real, half-fantasy. The subtext is the brutal wounding of Spain by the fascist rule of General Francisco Franco, which began in 1939 after his victory over the Republicans. It’s obvious that Del Toro despises the fascists, but also that he knows and cares as much about the social conditions after the Spanish conflict as he does about creating underworld life forms.
The story, as everyone knows by now, is about a young girl named Ofelia (Ivana Baquero) who’s given to fantasy head trips, and how this both conflicts with and provides escape from her new stepfather — a cold-hearted fascist Army officer — Captain Vidal (Sergi Lopez) — whom her pregnant and sickly mother (Ariadna Gil) has recently married.
Soon after arriving at Vidal’s military-command outpost within a densely shaded forest, Ofelia soon conjures or encounters (you decide) a tall goat-like Pan figure — a faun — in a hidden-away labyrinth. This eloquent and fascinating creature (Doug Jones) tells Ofelia that she’s the reincarnation of a long-dead princess, but to prove her worth she must complete three dangerous tasks. To which she commits.
Meanwhile, Ofelia eventually learns that Vidal’s head servant Mercedes (Maribel Verdu, the doomed hottie in Y Tu Mama Tambien), is the sister of the leader of the remnants of the local rebellion, and that she’s been stealing Vidal’s supplies to help fortify the Loyalists. Also teaming with her is Vidal’s personal physician (Alex Angulo), who sneaks Mercedes medical supplies when Vidal isn’t looking. 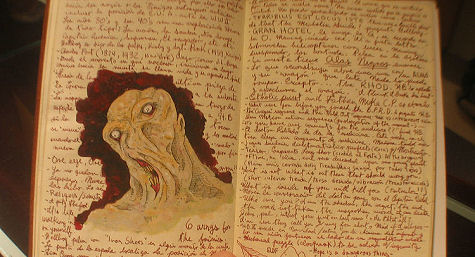 Suffice that the real and the unreal eventually collide in a riveting way, and that the hard realities of the war take their toll on many characters, including Ofelia. The only beef I have with the finale is the storybook notion that by passing through the membrane of death one’s spirit is released into a better place where departed loved ones greet a new arrival. I didn’t buy a character’s death as a happy ending in Steven Soderbergh‘s Solaris, and I’m not buying it here.
Nonetheless, Pan’s Labyrinth is a beautifully woven fable — an adult fantasy film if there ever was one. It’s a kind of light-horror rhapsody — a sensitive and delicate fairy tale on one level, and a gripping political war drama on another. And it has some of the most startling and mind-bending images I’ve seen in any such film, ever.
Here, again, is the mp3 file, recorded off my cell phone as I stood under an awning at the corner of Montrose and Bushwick during a late-morning rainstorm. (The reception in Michael Arndt‘s third-floor apartment is piss poor. For T-Mobile sufferers, I mean.) 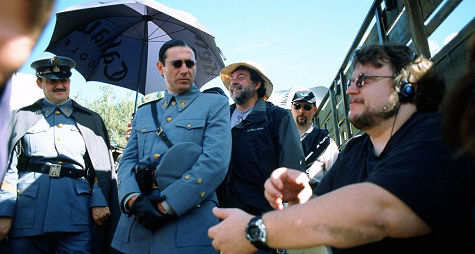