It is probably inevitable that Sally Hawkins, the cheerful and indefatigable Poppy in Mike Leigh‘s Happy-Go-Lucky (Miramax, 10.10), will be talked up as a Best Actress nominee once the film starts showing around. (It opened in England last April and came out last week on DVD over there.) An elementary-school teacher who happy-vibes just about everything and everyone, Polly is an unstoppable alpha dispenser — spirited, effervescent — and Hawkins certainly inhabits her whole-hog. 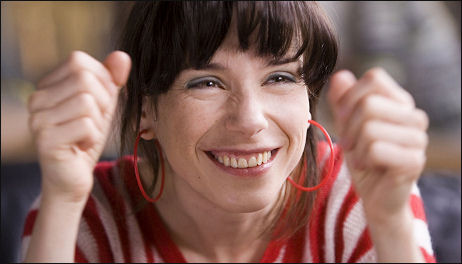 She carries Happy-Go-Lucky, she carries its spirit, and she does handle herself well in the sad-shock scenes at the end of the film with Eddie Marsan, the driving instructor with the correct manner and ferociously uptight, anti-immigrant attitude. In fact, the last 15 to 20 minutes contain the best stuff in the film, and I throughly respect Hawkins for her performance in this section. She handles her scenes with quiet maturity and resigned grace.
But her Poppy character epitomizes a sort of person I’ve never been able to tolerate — the emotional fascist who’s relentless about being happy, smiling and sparkly, but who also insists — here’s the problem — on forcing her bubbliness upon others (acquaintances, strangers, anyone) with the ultimate idea of converting them to their way of looking at life, or at least giving them a contact high to take home.
What’s especially oppressive and dictatorial about smiley-faced brownshirts like Poppy is their determination to gently bully you into submission. If you don’t get on board with the mutual-alpha, they’ll interrogate you like Laurence Olivier‘s Zell (the Nazi character in Marathon Man), looking at you with a quizzical grin and asking, “Are you happy?” or “Having a bad day?” Speaking from experience, I can advise that the best response is “I was feeling pretty good, actually, until you asked me that.” 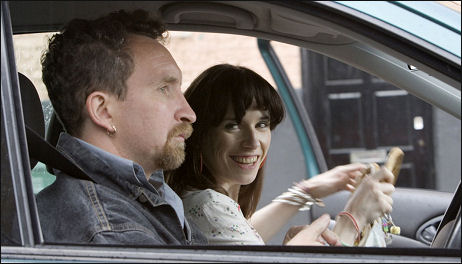 Imagine if Poppy was a born-again Christian asking total strangers, “So have you accepted Jesus as your personal savior?” and “Would you like to be saved?” The police would be called, she’d be cuffed and thrown into a van and taken down to the station. But there’s no recourse with the happy-happies.
I hate people who ask me if I’m happy because, of course, they’re not really asking me that. They’re saying they’ve observed my behavior, examined my vibe and decided that I just don’t have the right peppy-happy attitude, and that I need to adjust it right away so that it pleases them. I do meet these people from time to time. They’re like Moonies or Hara Krishna devotees — they’ve got the beautiful inner force inside them, and they know they’ve got that wondrous glow in their faces, and they’re determined to beat you over the head with it until you’re on your knees, bloody and begging them to stop.
Poppy feels like a kind of symbol of the whole happy-face movement of the ’70s, which for me represented a kind of alpha-vibe fascism that you could sense every so often in certain liberal-minded circles. Get with the positive attitudes or else! The late George Carlin once said on HBO’s “Real Time with Bill Maher” that “when fascism comes to America, it will not be in brown and black shirts. It will not be with jack-boots. It will be Nike sneakers and smiley shirts. Smiley-smiley.” 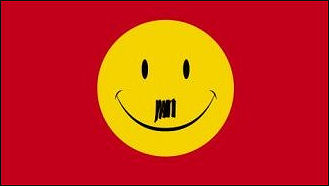 The French poster for Leigh’s film, called Be Happy over there, has a slogan at the bottom: “Adoptez la Poppy attitude!”
The term “emotional fascism” was first coined by Elvis Costello in the ’70s, and it’s real, you bet. There’s a scene when Poppy’s friend Zoe says, “You can’t make everyone happy” and Poppy replies, “There’s no harm in trying that Zoe, is there?” I am here to stand up and say that yes, there is harm in it, and would all the Poppy girls of the world please refrain from ever doing so again in my presence? It’s like being beaten with Mao’s little happy-face book during the Great Cultural Revolution.
There are many of us, I’m presuming, who look upon cheery, cock-eyed optimists as people you sometimes have to speak to at parties — sometimes it’s better just to suffer quickly and get it over with so you can move on — but if you see them coming down the street do cross over to the other side and duck into a book store or something, and then stay there for a good 15 minutes, just to be safe.