Nobody in the world is more queer than myself for color photos taken on the sets of films shot in black-and-white. I would kill to see a couple of robust color snaps of Paul Newman hanging with Jackie Gleason and George C. Scott during the making of The Hustler. Or of Burt Lancaster and Kirk Douglas between takes on Seven Days in May. A rich color capturing of Peter Lorre and Michael Curtiz and Dooley Wilson and Humphrey Bogart on a sound-stage set of Casablanca would be heaven. 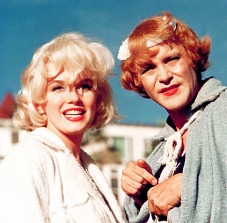 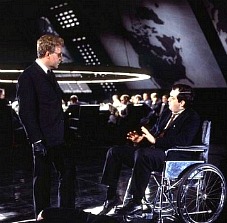 (l.) Marilyn Monroe, Jack Lemmon, Some Like It Hot; (r.) Dr. Stranglelove shot of Peter Sellers and Stanley Kubrick copied from a column on Ain’t It Cool.

Or a nice color snap of John Wayne, Montgomery Clift, John Ireland and Howard Hawks shooting the shit between takes of Red River . Or one of Hawks and Cary Grant, Thomas Mitchell and Jean Arthur on the set of Only Angels Have Wings. Or color shots of Marlon Brando and Eliza Kazan and Eva Marie Saint on the Hoboken docks during the shooting of On The Waterfront. Anything along these lines would be great. If anyone has any scans or sources of any kind, please forward.