Tulsa World posted two photos today of Terrence Malick, Javier Bardem and Ben Affleck — collaborators on Malick’s latest film, which is untitled but has something to do with fishing. They’re shown hanging on a street in Pawhuska, Oklahoma. They tell us, at least, that Bardem is playing a bespectacled priest or minister. 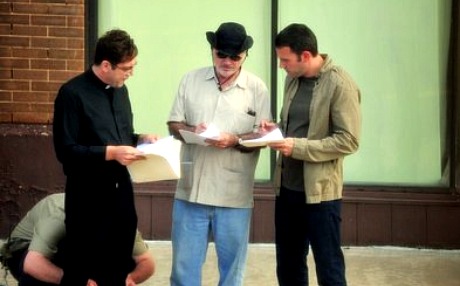 “It’s unknown what the movie is about,” reports Tulsa World‘s Michael Smith, “outside of a nebulous description as a love story. Filming began in October in Bartlesville, then moved to Pawhuska for a time, with shooting also taking place in Tulsa at a refinery and at Tulsa International Airport.

The costars are Rachel Weisz, Rachel McAdams and Barry Pepper.

Why, I wonder, hasn’t a serious stealth photographer visited the set and taken a decent photo of Malick? It couldn’t be that hard. The last full-face smiling shot of the secretive, Sasquatch-like director happened during filming of The Thin Red Line some 12 years ago . Isn’t it about time for a new one? Only one person has had fewer photos taken of him/herself than Malick, and that’s Nikki Finke. 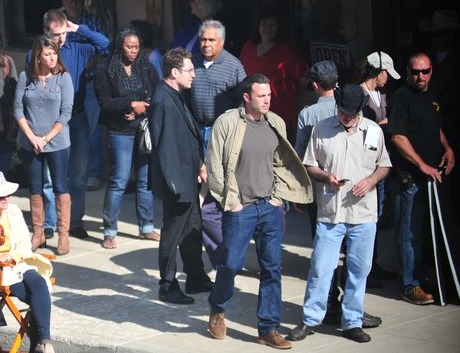 Pawhuska is the county seat of Osage County, Oklahoma. The population was 3,629 at the 2000 census. The late Ben Johnson (“Sam the Lion” in The Last Picture Show) is probably the most notable native. Tracy Letts‘ Pulitzer Prize-winning play August: Osage County is set on a farm near Pawhuska. 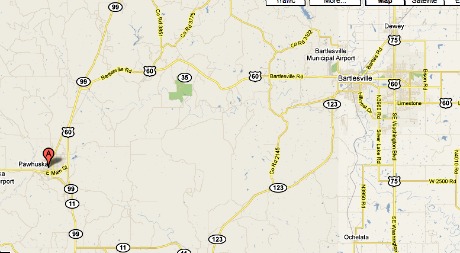