Do you want to read a Bluray review that hems and haws and tap-dances on the fence rail and goes badda-bop and badda-beep? Then read Martin Leibman‘s Bluray.com review of the brand-new William Friedkin and Owen Roizman-approved French Connection Bluray, which I creamed over a couple of days ago. 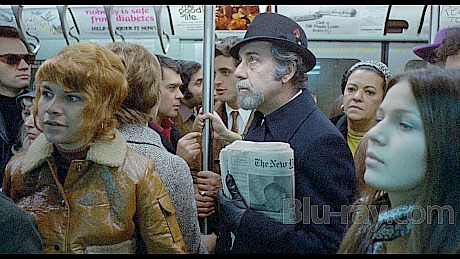 Clearly the new Bluray represents the film as originally shot and seen — 16mm-ish, rugged, gritty –with some reds and oranges popping through extra vividly. There’s no question this is the version to have and hold instead of that godawful blotchy, muddy, desaturated Bluray that Friedkin mastered and had released by Fox Home Video in 2009.

But Leibman, striving for a tone of balance and fairness and detachment, can’t bring himself to just say that. Largely because (we eventually learn) he doesn’t agree, but also because the changes haven’t been passionately explained.

Here’s how he puts it when he finally gets around to the yay-nay portion of the review:

“In a case like this, then, with an argument existing for one side” — i.e., the way the film looks on the new Bluray — “and none, really, for the other, it comes down to personal preference. The majority seems to prefer, or at least has demanded in the past, a transfer more in line with what this release offers.”

“Seems” to prefer? Hey, Martin…don’t go out on a limb!

Here’s my favorite line in his review: “At the end of the day, it makes for a fun little comparison but serious viewers have certainly been put in something of a pickle with this one.”

Believe me, Martin — nobody but nobody feels like they’re in a pickle with this thing. The bad version has been discredited, pure and simple, and the Munchkins are marching around the town square singing “ding-dong, the witch is dead.”

To my knowledge there’s only one person who might be saying that it’s a 50/50 thing, and that some might prefer the ’09 version and some the new one blah blah and what a pickle, and that’s MCN’s David Poland. Poland actually wrote the following when Friedkin’s bleachy version was released in early ’09: “The French Connection on Blu-ray is one of the great additions to the highest shelf of my Blu-ray library, up there with The Godfather, the Kubrick films, and Pixar.”

Leibman finally comes down on the side of the 2009 version near the end of the piece, not because of what he sees and feels or thinks but because the new version lacks the passionate defense or explanation from Friedkin to explain why the natural hues have been reverted back to.

“Considering Friedkin’s rather passionate and convincing argument on the old release, however, it’s difficult to argue against it, especially considering that there’s no such explanation here save for a blurb on the box proclaiming the approval of both the director and the cinematographer for the new transfer,” he writes.

Have you ever read such a load of gooey gelato bullshit in your life?

What Leibman is saying, in effect, is this: “Seeing is not believing because the visuals alone are not enough. A persuasive argument and/or explanation for the natural look and tone of this new transfer must be included on an extras supplement or on a printed statement of some kind, or the Bluray itself must necessarily suffer in the minds of critics like myself. It’s not enough, in short, for this new Bluray to look better. It has to be accompanied by a persuasive theory.”

If the “lacks a persuasive theory” remark rings a bell, it’s from Tom Wolfe‘s The Painted Word.