Unlike myself, a friend has found the time to finish a 6.23.10 draft of Natalie Portman and Laura Moses‘ BYO, which I was sent yesterday. L.A. Times reporter Stephen Zeitchik recently described it as a “raunchy, female-themed Superbad comedy.” But “it doesn’t have any serious Jonah Hill-like vulgarity,” my colleague says. “Just lots of Michael Cera snarkiness and McLovin dopey-ness.” 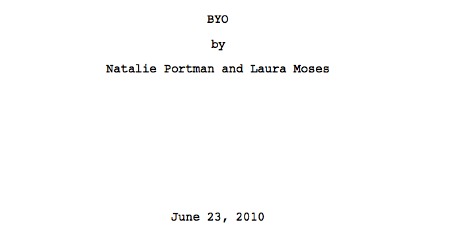 The two main characters are Lucy and “Al” (short for Alice) — Lucy is the wild sex fiend and Al is the more or less level-headed one. There’s a scene on page five in which Lucy is caught blowing a 15 year-old by the teen’s mother. (I read about ten pages so even I got that far.) “There is one other sex scene,” my friend says, “but who knows what it’ll be. Let’s just say it doesn’t get any dirtier than the page-five BJ.”