I caught John Cameron Mitchell‘s Rabbit Hole (Lionsgate, 12.17) for the second time this evening. It hasn’t diminished a bit since I last saw it at the Toronto Film Festival; if anything, it’s gained. It’s a sad, honest and fully engaged thing, and never the least bit boring. It has no weak scenes — each is gamey, steady and true, and adds another layer to a whole that becomes more and more intriguing as it goes along. Really — this is not Oscar bloggie blather.

Every actor in the cast nails it with verve and snap, but especially Nicole Kidman, Dianne Wiest, Aaron Eckhart and (in his motion picture debut) Miles Teller.

I take it back about Rabbit Hole being an A-minus — I’m now calling it a solid A, and I still have no doubt about its ability to penetrate as a Best Picture contender. I’m not just “saying” this. It really is a keeper; it holds itself together and deepens the game and spreads out and sinks in a step-by-step basis.

Rabbit Hole is a restrained/contained middle-class grief drama in the vein of Ordinary People and In The Bedroom (i.e., dead son). David Lindsay-Abaire‘s screenplay (based on his play) never lays it on too thick, but doesn’t hold back too much either. It’s a process drama about keeping the trauma buried or at least suppressed, and about how it comes out anyway — a little hostility here and there, odd alliances and connections, a little hash smoking (a la American Beauty), stabs at organized grief therapy, questions of whether to keep or get rid of the son’s toys.

It finally explodes in a bracing argument scene between Kidman and Eckhart, and then it subsides again and comes back and loop-dee-loops and finally settles down into a kind of acceptance between them. Not a peace treaty as much as an understanding that overt hostilities will cease.

A few people applauded at the end of the TIFF press screening that I attended. They also applauded big-time this evening. This is a very well honed, entirely respectable, honestly affecting drama. There’s no doubting and disengaging from any of it. 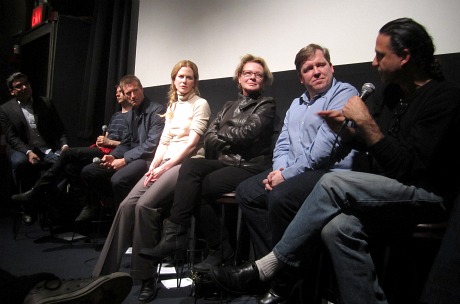