Directed and written by Nora Ephron, Julie & Julia (Sony, 8.7) is primarily about devotion and rapture in the preparation of exquisite cuisine. Or, to speak more fundamentally, about how the best things in life come from love and worship. It’s built upon the life of famed chef Julia Child (Meryl Streep) but more particularly Child’s influence upon fan, fellow devotee and author Julie Powell (Amy Adams). 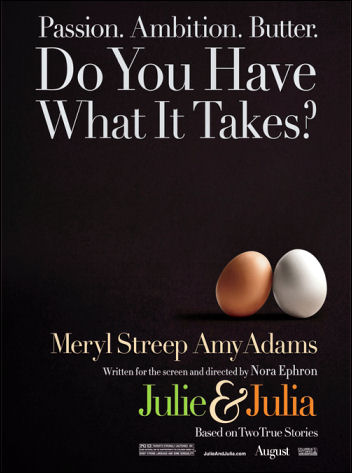 The through-line of the film is an online project by Powell, begun in 2002, in which she wrote about her daily experiences of cooking each of the 524 recipes in Child’s Mastering the Art of French Cooking. Powell eventually turned her blog into a book, Julie & Julia: 365 Days, 524 Recipes, 1 Tiny Apartment Kitchen (Little, Brown, 2005), which was retitled Julie & Julia: My Year of Cooking Dangerously (Back Bay Books, 2006) when it went to paperback.

Ephron’s screenplay is adapted from Powell’s book as well as My Life in France, an autobiography cowritten by Child and Alex Prud’homme. Both books adapted by Ephron were written and published in the same time frame of 2004-06. Ephron began filming Julie & Julia in March 2008. Obviously aimed at an older female crowd, this seems moderately inviting from my perspective.

Besides the Powell angle, the film also covers the years Child and her husband Paul Cushing (Stanley Tucci) spent in Paris during the 1940s and 1950s, when he was a foreign diplomat who was eventually investigated by Sen. Joseph McCarthy for alleged communist ties.