I should have linked by now to Moises Chiullan’s 4.6 piece about the Star Trek screening at the Alamo Draft House. (Leading excuses include yesterday’s half-day shutdown, urgent business in the city, screenings, etc.) In any case here it is. Rapturous, glowing, hosannahs, fanboy flutter, my wife loved it, etc. 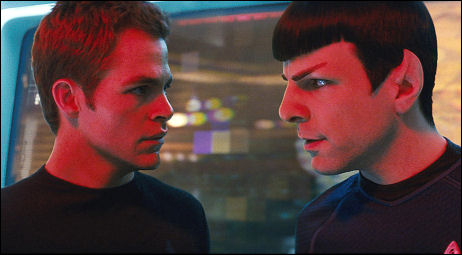 If I sound a bit cynical, it’s because I’ve concluded that any mainstream feature that premieres at the Alamo Drafthouse is going to inspire waves of orgasms among the Austin fanboys and film obsessives. Which you can never trust, I suspect, because these guys are always allowing their reactions to be colored by feelings of hometown flattery (“You chose our fair city to preview your brand-new movie? We love you!”). And because you can’t trust fanboys, especially when the film has anything to do with galactic derring-do.

Having seen about 25 or 30 minutes worth of Star Trek footage last December (or was it late November?), I have to say that director JJ Abrams‘ vision of a new-generation Star Trek starring nothing but under-35 types feels like a kind of GenY Bugsy Malone in space. At least as far as Chris Pine‘s Cpt. Kirk and Zachary Quinto‘s Spock are concerned. Everyone else seems a good 10 to 15 years younger than the actors in the original Gene Roddenberry TV series. Or is this because actors in the mid ’60s looked older than their counterparts today?

The upside is that Abrams has at least come up with his own take, sufficiently divorced from the William Shatner-Leonard Nimoy imprint. What I saw was visually striking (i.e., well designed), thrilling and so on. And I like Quinto’s sharply focused manner — the steady gaze of his jet-black eyes and the way he drills in on his matter-of-fact dialogue. So I didn’t feel like it was the wrong way to go. A lot of people are going to be delighted with Star Trek. It’s going to make a lot of money.

It did, however, feel friggin’ young to me. I guess I had trouble believing that the senior administrators who selected the crew of the Enterprise would adopt as their motto, “We have a ship that cost several billion to make and requires the best crew we can find, so let’s not choose anyone who looks older than 35!” 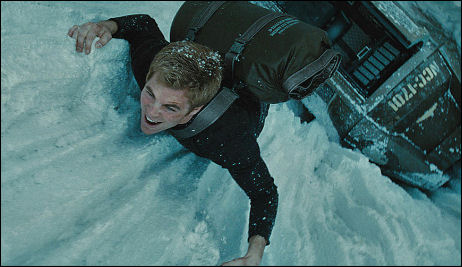 My main problem was with Pine. The man has nothing going on behind his eyes. He has the face and the soul of a guy who makes surfboards and boogie boards in his Venice Beach garage. Or that of a Santa Monica lifeguard. Or a Harley Davidson salesman on Lincoln Blvd. south of Washington. On top of which I felt that Anton Yelchin‘s Checkov accent was way over the top.

“Star Trek is an unrelenting, slam-bang naval war movie that rarely catches its own breath,” he wrote. “Shades of swashbucklers and submarine thrillers alike are all over the storytelling with all kinds of smash-bam-kaboom stuff going on throughout. It’s packed to the gills with escapist heroism with a healthy dose of optimism. There’s plenty of room for interpretation for those who want to look for some allegory that is or isn’t intended. The key is that Abrams and his team have bottled that ’77 stuff of legend.

No Star Trek film “has never been this visually dynamic. The camera work is full of lens flares, reflections, and focus effects that really sell the atmosphere. You also have a more nuts n’ bolts, gaskets n’ pipes-styled Enterprise, where the ship feels like a labyrinthine submarine merged with an aircraft carrier. The mixture of practical and CG alien and creature effects are also fantastic, with all kinds of new stuff never seen before in the franchise in terms of design or quality. 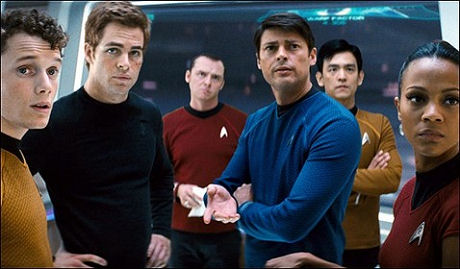 “Bruce Greenwood grounds the movie early on in a scene with Kirk at a bar. Chris Pine puts his own spin on Kirk that faithfully captures what hotshots like him are all about at that age. There have always been smart, capable guys who do stupid things for the hell of it, wanting a direction for their life to drop out of the sky. Karl Urban plays “Southern” as Dr. McCoy more authentically than any European or Australian who’s tried in recent memory. Simon Pegg steals each scene he’s in where he opens his mouth, which is to say every scene in which he appears.

“Everyone else is great, but I don’t want to go on forever here. The Enterprise crew all do impulsive, stupid things, but that’s what that age is like, isn’t it? I’ll add that Anton Yelchin is fine as Chekhov. Don’t let early reports from footage screenings convince you his pronunciation gag ruins things. He plays it straight as an actual speech impediment, and it worked for me.”