Last night I took an instant dislike to Sur, a white-walled, Moroccan-appearing restaurant in West Hollywood that a lady friend (an ex-literary agent, now producing a feature) talked me and a couple of friends into patronizing. It’s nicely lit with candles and decorated with large flower urns and has a kind of casbah-in-Tangiers vibe, but it’s essentially an environment for vaguely shallow, easily-impressed, Maxim-magazine-reading, out-on-the-town tools who don’t know any better. 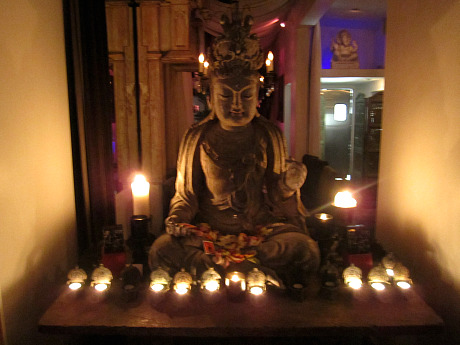 Listen to the music that kicks in when you visit the website…good God! I was particularly offended by the peon T-shirts that the male waiters wore (i.e., the name “Sur” spelled out in sparkly gold letters) and the hot-casino-hooker dresses that the waitresses are obliged to don.

I was particularly revolted by the synthetic disco music that they began playing around 10:30…party hour! We asked one of the waiters if they could please not play this music. He said “of course” and then went away and the music continued. We asked him again and he said “yes, surely” and went away and the music continued. Okay, that’s it, I told myself. I’m going to get these guys.

So did a Steve Buscemi and left no tip. I’ve generously tipped waiters and waitresses all over the world, but last night I had to draw a line. Something in me revolted. I will not tip any waiter or waitress wearing garish Tijuana-level clothing that I wouldn’t wear with a gun to my head, and I will deprive any waiter or waitress working in a restaurant that plays disco music of any and all gratuities. If they choose to work at a Vegas-styled place like this, it’s their problem. If they can’t figure out there are people like me whose stomaches fill up with acid when subjected to disco music, that’s their misfortune. Actions have consequences.

The food, drink and service were totally fine. That wasn’t the issue. Subject me to an Uday Hussein-type environment and someone, trust me, is going to pay.