Three days ago, the N.Y. Times posted a story by Nicole Hong titled “Inside One Company’s Struggle to Get All Its Employees Vaccinated.” The subhead reads, “At an optical business in New York City, it took months of coaxing, a cash bonus and a weekly testing mandate to persuade 90 percent of the staff to get a coronavirus vaccine.”

Every third or fourth paragraph is infuriating. Here’s a taste:

“John Bonizio, 63, the owner of Metro Optics, was ecstatic when he learned in January that optometrists and their staff members would be among the first groups eligible for the vaccine. During the chaotic early days of the rollout, Mr. Bonizio found a hospital with plenty of vaccine appointments available and offered to schedule them for every employee.

“About half of the staff members rushed to get a shot. But because his employees interact with dozens of patients and customers each day, he wanted everyone to be vaccinated. When he called the employees to ask why they were hesitant, their answers foreshadowed the resistance that would unfold in the coming months around the country.

“Some people said they did not trust the government, citing false conspiracy theories that the vaccines contained tracking microchips planted by the authorities. Others noted that the vaccines had not yet been formally approved by the Food and Drug Administration and worried that getting vaccinated would interfere with their ability to have children. (Scientists have said there is no evidence that the vaccines affect fertility or pregnancy.)

“One employee said she was concerned because she thought a vaccine had caused the characters in the film I Am Legend to turn into zombies. People opposed to vaccines have circulated that claim about the movie’s plot widely on social media. But the plague that turned people into zombies in the movie was caused by a genetically reprogrammed virus, not by a vaccine.

“Talking to employees about the misinformation they saw spreading on social media was like walking on eggshells, said Brett Schumacher, 38, the company’s general manager. Trying to persuade a skeptical co-worker to trust the government and health officials in the middle of the workday can be awkward.

“’We do have one person who is just anti-vax, period,’ Mr. Schumacher said. ‘I didn’t get into the full reasons behind it because that kind of stuff just makes my blood boil.'”

Hong spoke to a Metro Optics employee named Tiara Felix, who said she’ll leave her job if faced with a vaccine mandate. “There’s no choice,” Felix told Hong. “I’ll have to quit.”

In short, Tiara Felix is rather stupid. There’s no other term for it, and there’s no known cure. 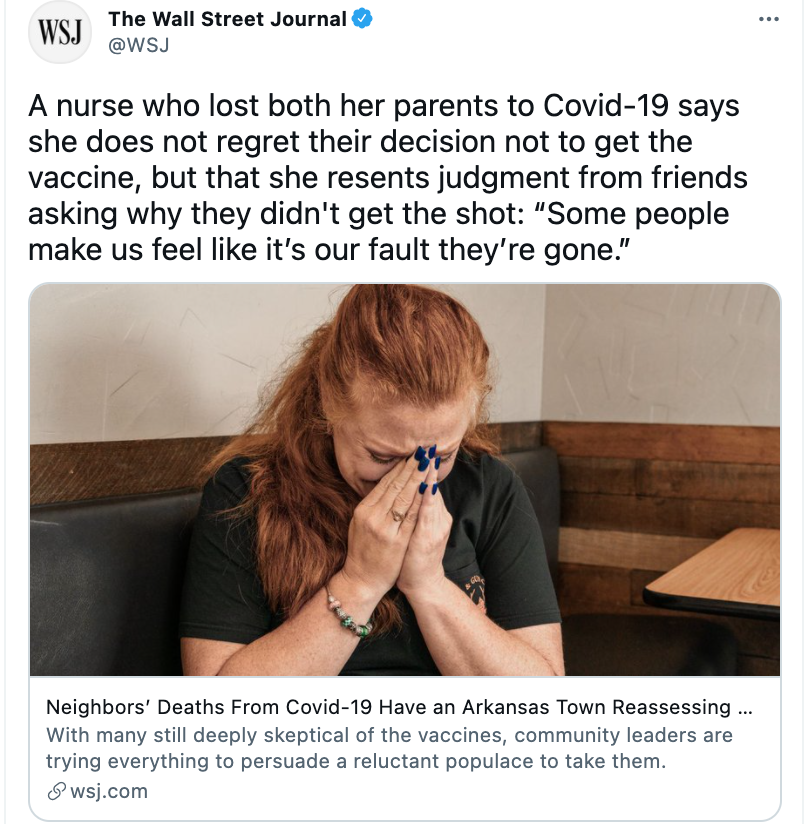 August 9, 2021by Jeffrey Wells45 Comments
« Previous post
Caprice or Farce
Next post »
Gunn: “I Don’t Care That Much”