A few weeks back that call-to-arms Expendables trailer was funny and cool and everyone got it. Then The Expendables started to be screened and the air went out of the balloon. Which is why Stephen Zeitchik‘s 8.6 L.A. Times piece about gender genre loyalty and the epic box-office battle between The Expendables and Eat Pray Love feels a bit behind the curve. 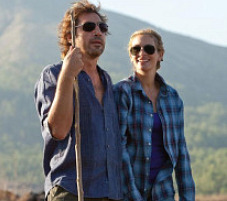 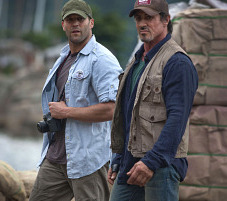 I was down with the idea of The Expendables being a standard-bearer for guy movies, but no longer. Any guy who wants to bail on this notion and join me on the metrosexual side and at least give Eat Pray Love a fair shake is welcome to join.

If we were looking at a face-off between, say, Sex and the City 2 — a film that celebrated spiritual emptiness, material indulgence and everything appalling about upscale 21st Century female culture — and Tony Scott‘s Unstoppable, then we’d be talking about something cool and perhaps even socially significant. I’m usually into the Tony Scott experience (Domino was an exception) because it makes the guy sensibility feel slick and cosmopolitan and technologically in-step. I would stand four-square with his latest against any chick flick that falls under the heading of semi-vapid. Which, let’s be honest, is a fair adjective concerning 90% of the output.

But I can’t feel any allegiance or camaraderie with The Expendables, even in a joke-assy, what-the-hell sense. So Eat vs. Expendables is simply not an equal or interesting battle.

I don’t know how good or bad Eat Pray Love is (it’ll begin screening early next week), but the odds are that it’s at least a somewhat better film that the Stallone. The spiritual element may seem effete and/or sanctimonious to some but I doubt if it’ll be presented as laughable or groan-worthy, which is more than you can say for certain portions of The Expendables. And the Eat Pray Love trailers are telling me it’ll at least be fine on a technical level. It’ll look and sound like a movie made in the 21st Century as opposed to The Expendables, which looks and feels like a 1987 Cannon film.

Zeitchik says that Eat vs. Expendables is “as close to a laboratory environment as you can get. For one thing, the two films’ subject matter and intended audience couldn’t sit on further ends of the gender spectrum. There isn’t much in each movie that should appeal, at least according to what Hollywood executives commonly believe, to the non-core gender. The Expendables contains few romantic interludes, while Eat Pray Love doesn’t feature many mercenary gunfights. Julia Roberts is interested in discovering a foreign country. Sylvester Stallone wants to blow one up.

“It’s also a near-perfect test-tube case because the movies are similar in so many other key respects. Both are mid-budget studio films coming out in the dog days of August. Both were made with the goal of pleasing crowds more than critics.” (Really? That was Ryan Murphy and Julia Roberts’ goal? They sat down and said, “Let’s make a movie that the critics will probably hate — well, maybe some of them wil be okay with it — but which women will love”?) Zeitchick also notes that “both pictures are driven by one huge-name star accompanied by a host of smaller ones. And the two are going head-to-head with very little competition.

“Given all this, the film that wins the weekend will provide a given gender with bragging rights (and perhaps, also, hand a few ideas to demographic-minded studio executives). It’s almost like each movie is carrying the weight of its gender on it shoulders (a point made amusingly in the below fan trailer for The Expendables which implores men to turn out for the film next weekend and defeat Eat Pray Love).”

No, no…that’s what I’m saying. The Expendables is not carrying the guy-movie genre on its shoulders. If anything it’s somewhere between a slight and a full-on embarassment to action fans.

“Though both films are tracking at roughly the same rates — in electoral terms it’s a dead heat — Eat Pray Love is actually generating more interest among its core audience than The Expendables is among its audience,” Zeitchk continues. “It may be that men simply don’t want to see the Stallone flick and would be more enthusiastic if they simply liked it more. But another inference appears just as valid: that men just can’t get worked up as women about a movie aimed at them.

Zeitchik concludes with the following: “So if there’s a disparity among the core audience, where does the Stallone movie make up ground? Well, with women. The Expendables is tracking better with females than Eat Pray Love is with males.”

That won’t last long. Not after women hear about Giselle Itie‘s Sandra character — the only lady with any screen time in The Expendables. Sandra is a cross between a standard-issue Latina spitfire and a kind of perfect, idealized, defenseless damsel-in-distress. She might as well be modelled on Purity Dean, the heroine in Paul Loomis‘s Pure as The Driven Snow. 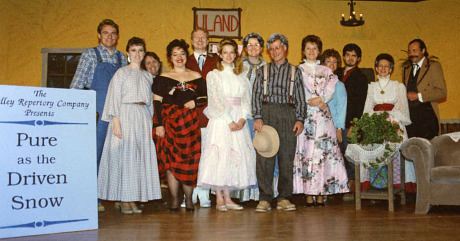