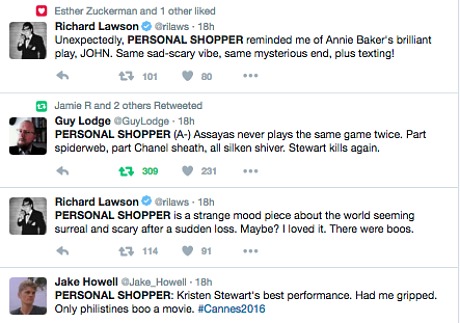 “This is a measured, richly ambiguous work about the subjective process of grief — masquerading as a ghost story — that experiments with the minutiae of film language as only a master of the medium can do. [It’s] a cinephile’s idea of a horror movie, their headiest ingredients elevated to an abstract plane. The slick camerawork, slow-burn tension and mysterious circumstances have less to do with shock value than the interior processes behind it. Audiences unwilling to wrestle with this fascinating gamble demonstrate the worst fear plaguing moviegoing culture: Something different.” — Indiewire‘s Eric Kohn.

“Personal Shopper was booed not because it’s bad (it emphatically isn’t), but because it breaks lots of good-taste conventions in a way that’s deliberately designed to set your soul jangling.

“For one thing, it features explicit — and occasionally terrifying — supernatural elements, but it isn’t a horror or fantasy film, and they’re presented without a smidge of insincerity or irony. For another, it elongates and teases when other films would accelerate and summarize.

“There’s [also] its exploration of female desire, which strays with reasonable explicitness into fetish territory — lots of steep shoes, strappy gowns and auto-eroticism — but in a way that’s bluntly unconcerned with pleasing straight male viewers. And as the cherry on top, its ending withholds even the faintest glimmer of closure.” — Telegraph‘s Robbie Collin.

“This wildly unconventional study of a young American woman going through a spiritual crisis is a broken but never boring mix of spine-tingling horror story, dreary workplace drama and elliptical identity search, likely to go down as one of the most divisive films of Stewart’s career.” — Variety‘s Peter Debruge.