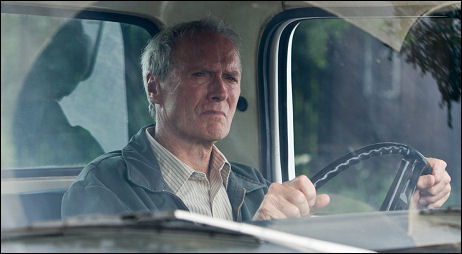 “Twice in the last decade, just as the holiday movie season has begun to sag under the weight of its own bloat, full of noise and nonsense signifying nothing, Clint Eastwood has slipped another film into theaters and shown everyone how it’s done,” Dargis starts off. “This year’s model is Gran Torino, a sleek, muscle car of a movie Made in the U.S.A., in that industrial graveyard called Detroit. I’m not sure how he does it, but I don’t want him to stop.

“Not because every film is great — though, damn, many are — but because even the misfires show an urgent engagement with the tougher, messier, bigger questions of American life.

“Few Americans make movies about this country anymore, other than Mr. Eastwood, a man whose vitality as an artist shows no signs of waning, even in a nominally modest effort like Gran Torino.

“Dirty Harry is back, in a way, in [this film], not as a character but as a ghostly presence. He hovers in the film, in its themes and high-caliber imagery, and of course most obviously in Mr. Eastwood’s face.

“It is a monumental face now, so puckered and pleated that it no longer looks merely weathered, as it has for decades, but seems closer to petrified wood. Words like flinty and steely come to mind, adjectives that Mr. Eastwood, in his performance as Walt Kowalski, expressively embodies with his usual lack of fuss and a number of growls.”

Morgenstern begins his review thusly: “No one makes movies like Gran Torino any more, and more’s the pity. This one, with Clint Eastwood as director and star, is concerned with honor and atonement, with rough justice and the family of man. It raises irascibility to the level of folk art, takes unapologetic time-outs for unfashionable moral debates, revives acting conventions that haven’t been in fashion for half a century and keeps you watching every frame as Mr. Eastwood snarls, glowers, mutters, growls and grins his way through the performance of a lifetime.

Gran Torino “is a meditation, as affecting as it is entertaining, on the limits of violence and the power of unchained empathy. It seems to be exactly the movie [Eastwood] wanted to make at this point in his long career. It is defiantly old-fashioned, and occasionally, albeit endearingly, self-indulgent. Most of all it’s heartfelt, and for me the feeling was mutual.”

December 11, 2008by Jeffrey Wells15 Comments
« Previous post
This Bird Has Flown
Next post »
Not In The Family