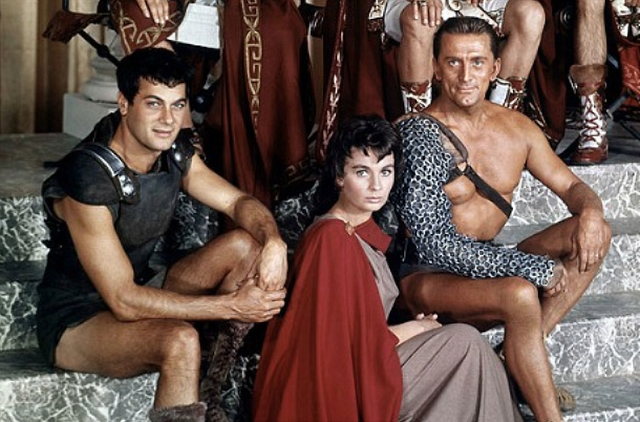 “Don’t give me the movie version with Spartacus and Varinia consumed by perfect blissful love and rolling around the grass — that was put in for the tourists. Everybody knows how guys get when they’re jealous. They just can’t get the sight of their wives or girlfriends pleasuring other men out of their heads.

“Notice that Spartacus’s best friend was Tony Curtis‘s Antoninus, the one guy in his inner circle who hadn’t been at Capua and therefore had never ‘had’ Varinia.”

Nine year-old comment #1 (“Ponderer”): “I’m intrigued by this line of thought, but would it have REALLY bothered him? Spartacus was a barely literate slave all his life. If he ever HAD sex, it was probably with some other prostitute. Arguably he may never have even met a woman who hadn’t done lots of favors with men. Treated and bred like an animal, he may not have even understood a concept of purity. (And yeah, best friends with Tony Curtis who hadn’t ‘done’ Varinia, but you know, it probably wouldn’t have loved to think about Antoninus possibly having lollipopped his hated Roman slavers.)”

Nine year-old comment #2 (“hviper”): “Varinia told Spartacus he was the best lay in the whole gladiator school, and she was just faking it with the other 70 or 80 guys…I don’t see a problem here.”

Nine year-old comment #3 (“Disconap”): “He would have been advised by the scribe Wellsius that if he manned up and stuck it out with her, he’d have a get out of jail free card.”

Nine year-old comment #4 (“Captain EO:): “Perhaps he got it all out of his system when he drowned Marcellus, the chap responsible for her relentless despoilings, in the hot stew…that seemed like a pretty cathartic moment to me.”