Speaking about the “teenaged Spielberg in early ’60s Arizona” film (aka Young Beardo) that Spielberg has been co-writing with Tony Kushner and intends to direct this summer, HE commenter Manwe Sulimo posted the following this morning: “I’d rather watch a James Cameron biopic focusing on his legendary behind-the-scenes antics. This Mother Courage shit [i.e., Michelle Williams as Spielberg’s mom Leah] sounds boring.”

HE reply: I would DEARLY LOVE to see a behind-the-scenes James Cameron film. Perhaps a making-of-Titanic movie. Or perhaps one about making the original 1984 Terminator. A film about Cameron’s creative methodology, force of personality and blitzkrieg approach. Because Cameron is (or could at least be portrayed as) a real-life version of Jonathan Shields.

A hard-driving and manipulative Hollywood producer played by Kirk Douglas in The Bad and the Beautiful, Shields was demanding and overbearing but at the same time devoted to filmmaking excellence — 85% David O. Selznick, 15% Val Lewton. Cameron has long exuded this same powerhouse approach, and I love the idea that a backstage Cameron film might deliver the same theme or psychology conveyed in the very end of Vincente Minnelli‘s 1952 classic — i.e., while some might complain that Shields/Cameron is no day at the beach, at the end of the day they still want to work with him because he’s “got it.”

I’m sorry but I would much rather see a “look out, here comes the steam-rolling Cameron!” film than Young Beardo. 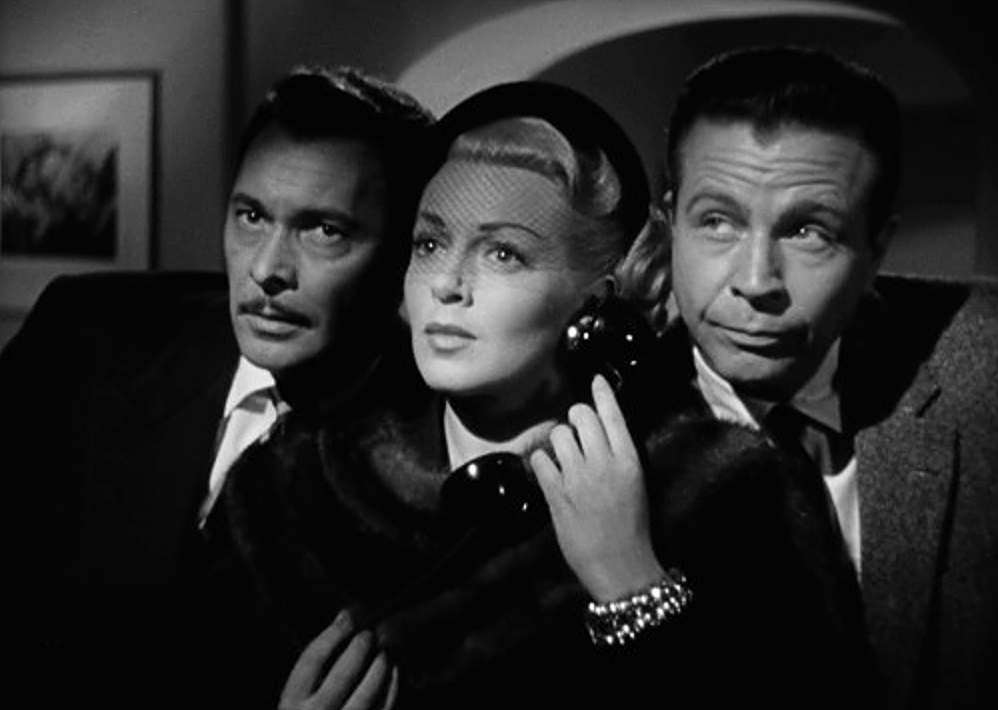 Barry Sullivan, Lana Turner and Dick Powell at the very end of The Bad and the Beautiful.

Side issue: In this 2014 Turner Classic Movies discussion between Robert Osborne and Drew Barrymore, Osborne mentions something that I’d never really considered before — i.e., that the 30-year-old Lana Turner was too old to play Georgia Lorrison, a young ingenue with a famous actor father and a drinking problem.

Turner would have been a better fit if she were ten years younger, Osborne believed. Or even five years younger, as she was in The Postman Always Rings Twice.

Barrymore on the final three minutes of The Bad and the Beautiful: “At the very end Walter Pigeon‘s producer says to Turner, Barry Sullivan and Dick Powell that yes, Kirk Douglas‘s character has “completely screwed you over and is a completely despicable person that you want nothing to do with. So yes, he ruined your life, but isn’t your life actually the best version of what it could be because of him?

“So I loved that complexity, and especially at the end of the movie…the last shot when Lana Turner picks up the phone to listen to Shields’ movie idea, and then Sullivan and Powell lean forward to hear it also…and they’re all in shadow until they pick up the phone and start listening to the conversation and thereby come into the light….and I thought, that’s a really cool way of lighting the metaphor.”