The shared mirth aside, what’s the most distinctive thing about this photo of Ethan Hawke, playwright Jonathan Marc Sherman and Josh Hamilton during a rehearsal for Sherman’s Things We Want, which begins previews at Manhattan’s Acorn Theatre on 10.22? For me, it’s the unattractive footwear. Hawke’s generic Foot Locker lace-ups with those lame white stripes on the side, Sherman’s chunky-soled construction boots, and particularly those godawful sandals worn by Hamilton that show his grotesque white feet, most notably his splayed, bony toes. 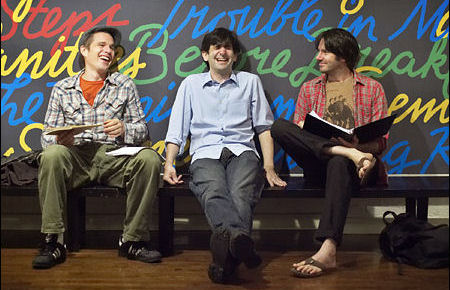 The most pronounced difference between boomer and GenX guys is that most boomers I know aren’t very big on wearing sandals anywhere except at the beach or at a picnic, and GenXers wear them just about anywhere, to anything. The idea that a fair percentage of men’s feet are fundamentally ugly or funny looking — an unwelcome sight for strangers — doesn’t seem to occur to under-40 types. Just as the idea of footwear that actually looks cool and elegant — shoes that might actually prompt a casual observer to go “whoa, nice” — has totally bypassed a good percentage of them.

This is a real generational dividing-line thing. Boomers are more partial to leather (loafers, lace-ups, boots), and are sometimes possessed of good taste in shoes and sometimes not. GenXers and GenYers share an almost uniformly atrocious taste in footwear — “affected” thick soles and conspicuous stitching, terrible color and design sense. In the warm months too many of them (guys in particular) walk around in dorky sandals, exposing without a hint of shame the most distasteful digits since the days of John the Baptist.

It used to be that only beatniks and hippies wore sandals. Uptown guys like Cary Grant and Dean Martin used to joke about the sight of them. Now sandals are legion in every town and city in the country. The idea of having to look at funny- looking feet is one reason I’m cool with working indoors a lot.

Some people (women especially) have nice-looking, even sexy feet. Maybe 15% to 20%, at best. But most people (particularly men) don’t, and those 80% to 85% really need to sit down and ask themselves, “Should I wear sandals to this thing I’m going to tonight?” The answer really needs to be no. Cover them up and keep them covered. For life. Please.