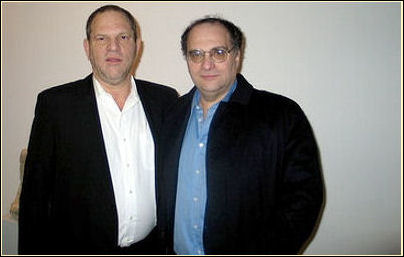 “The Weinstein Company is still looking to acquire or produce something for small money and have it blow up huge,” he notes. “And for years, Harvey Weinstein was the first and last stop for indie hopefuls hoping to make it big. Now, there are a dozen or more companies, many staffed by people who broke in with the Weinstein-era Miramax, that are looking for the same thing.”

This is the essence of Harvey and brother Bob’s problem. They’ve been outflanked by competitors who know the game as well as they do, and who generally have smooth, agreeable personalities who seem (the “s” word being crucial) more likely to respect and listen to filmmakers, and who are thought to be more trustworthy (the “t” word being a flexibly defined term).

Harvey tells Carr “that even the box office losers will eventually perform because risk has been hedged and deals for international rights, DVD proceeds, and pay television one-offs will yield profits. 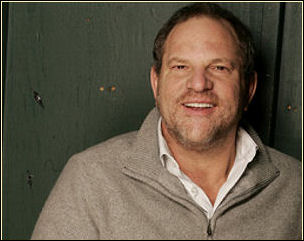 And at the Oscars, he expects The Great Debaters, a film directed by Denzel Washington and produced by Oprah Winfrey, and Grace Is Gone, a war-related film starring John Cusack, to be in the mix.” Hey, what about Cate Blanchett‘s Best Actress nomination for I’m Not There?

And “there are huge box office expectations around The Mist, another Stephen King project from Dimension,” Carr reports.

“But if the Weinstein catalog does not contain its share of winners, the value of the entire enterprise will be called into question. It is, in part, a self-created problem, with Harvey’s refusal to sit quietly while he built the company — by overpromising and underdelivering, he created a huge opening for a whisper campaign by his critics.

“There is a legion of competitors in Hollywood and New York who only tolerated Harvey Weinstein when he was on top and who are eager to do a happy dance on his company’s grave,” Carr observes. 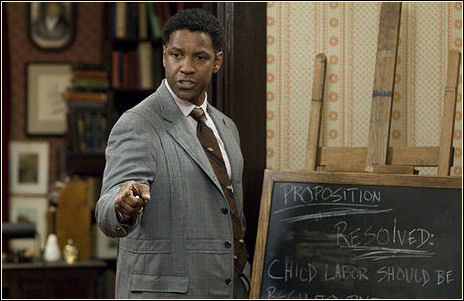 Denzel Washington in The Great Debaters, a 12.25.07 Weinstein Co. release.

“[But] they should not put their hands in the air just yet. The Weinstein brothers have roared back to life more times than the average monster in one of BobÃ¢â‚¬â„¢s money-making horror movies. But they remain deeply challenged, with some big losses on big bets, antsy investors and a lack of bench strength in a world of competitors they helped train and build.

“That doesn’t mean Harvey is in danger of slipping below the surface — his backers have far too much at stake — but it could end up getting hotter in there still.”

I need to say this again because things like this need to be said as often as possible in this business. You have to do right by your friends. That doesn’t just mean you have to make money for them. That also means that when things go wrong you have to stand up and make them right. Are you listening, Quentin Tarantino?

The worst financial hit that the Weinstein Co. has suffered in recent months was due to the failure of Tarantino and Robert Rodriguez‘s Grindhouse. Harvey bears the primary responsibility, of course, but Tarantino and Rodriguez took him for a bath by spending their asses off on a film that should have been made on a shoestring, like the real grindhouse flicks of the ’60s and early ’70s were.

If I were Quentin I would feel guilty as hell about this, and I would try to make things right by being a man, stepping up and making a return of the Vega Bros. film — i.e., Pulp Fiction II — for Harvey for almost nothing, and a soon as possible. I would push out a good script if it killed me (the Vega Bros. return to the earth as ghosts?), and I would convince John Travolta and Michael Madsen to do it for a reduced fee with deferments and basically do everything I can to even the score.

I don’t know Tarantino, but I wonder if he’s even capable of considering this idea of trying to undo the harm done to the Weinstein Co.? Maybe he is. Maybe he’s making moves along these lines right now….but I doubt it.