A Bluray of Delbert Mann and Paddy Chayefsky‘s Oscar-winning Marty (1955) will be released on 7.29. It gives me no comfort or satisfaction to report that the Bluray’s aspect ratio will be in the dreaded 1.85 with the tops and bottoms of the protected 1.37 image (seen on TV, VHS, laser disc and DVDs for the last five or six decades) severed with a meat cleaver. In early May aspect-ratio historian Bob Furmanek noted in a Home Theatre Forum post that (a) the Marty Bluray will (a) be presented “for the first time since the original theatrical release with Mann’s intended 1.85:1 compositions,” and that (b) “we provided the documentation to insure mastering in the correct ratio.” 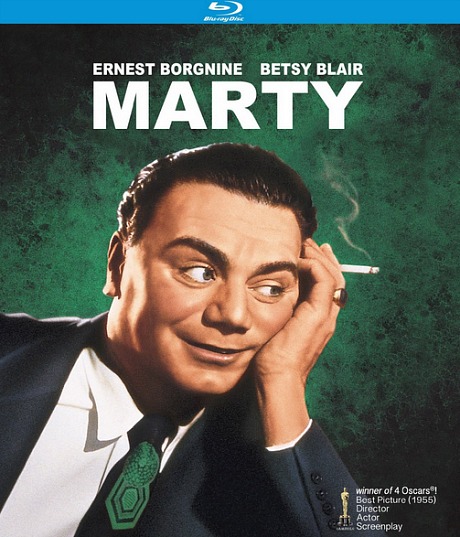 Let me once again explain the Furmanek spin, which always involves a certain sleight-of-hand.

Mann, who directed the original live-TV Philco Playhouse version of Marty with Rod Steiger in the lead, shot the film version of Marty so that it would look good within a 1.85 aspect ratio because all the big distributors had ordered directors to do this. Mann was ordered to make a 1.85 version in the same way that buck privates are ordered to clean the latrine, but the man made his bones in a televised realm that was boxy, boxy, boxy all the way. Furmanek is nonetheless stating that after honing his craft in live TV for many years and after directing the original teleplay in a 1.33 aspect ratio (i.e., the a.r. standard for television in those days), Mann “intended” a 1.85 image as final and definitive. In other words Mann had become a total 1.85 convert and a true believer by the time he shot the film version in 1954. After thinking visually in 1.33 terms as a TV director for years, Mann suddenly turned on a dime and “saw” Marty as naturally belonging within a 1.85 aspect ratio.

You can believe that if you want. I can tell you that if I was making the calls on the Marty Bluray I would politely ignore Furmanek’s thoroughly researched data stating that exhibition and distribution felt they had to present all non-Scope films within a 1.85 aspect ratio. I would chuckle at their fearful decision to simulate vastness so that non-Scope movies would look bigger and wider than TV images. I would ignore this data because the concerns and anxieties of distribution and exhibition executives in the 1950s don’t mean squat today. What matters is presenting Blurays in a way that looks as handsome and inclusive as possible. What matters is respecting visual information and showing it to viewers if you have it to show.