Author and historian Neal Gabler, currently writing a biography of the late Sen. Edward Kennedy, has penned a dismissive N.Y. Times article about John Curran‘s Chappaquidick, which opens today. The film delivers a reasonably frank account of Kennedy’s July 1969 car accident that resulted in the death of campaign worker Mary Jo Kopechne. Gabler’s piece is titled “How Chappaquiddick Distorts a Tragedy,” but it doesn’t explain this in any detail.

Gabler merely states that Joseph P. Kennedy was too incapacitated by a stroke to mutter “alibi,” that “many scenes cross from dramatic interpretation to outright character assassination,” and that that Kennedy, whose “first words after the accident are ‘I’m not going to be president’,” is portrayed as “callow, cunning, cowardly and self-interested yet moronic.” 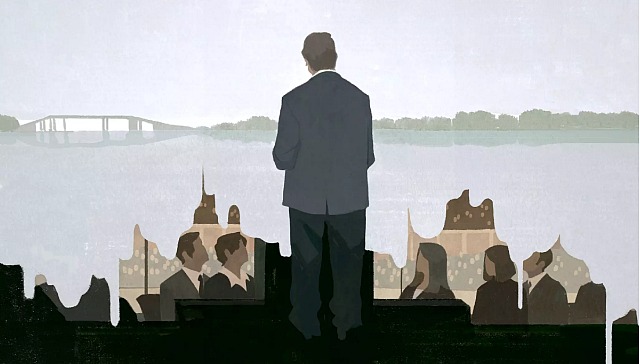 Maybe, but for an essay that promises to explain how Curran and screenwriters Taylor Allen and Andrew Logan have distorted history, Gabler offers few specifics.

He basically concludes that the film is “not factual,” “fake history,” that it “eviscerates” Kennedy “for narrow voyeuristic aims.”

Gabler excerpt #1: “Let’s set aside the fact that, despite the film’s advertisements claiming to tell the “untold true story” of a “cover up,” the story has been told plenty, and no one but the most lunatic conspiracy theorists see this as anything but a tragic accident in which nothing much was covered up.”

Gabler excerpt #2: “Contrary to the film’s implications, Kennedy immediately and forever after felt deep remorse and responsibility for the accident; it haunted him. By the end of his life, however, the then white-maned senator had managed to transcend celebrity and emotional paralysis and become what he had long aspired to be: an indispensable legislator whose achievements included the 18-year-old vote, the Americans With Disabilities Act and the Children’s Health Insurance Program.

Gabler excerpt #3: “At one point in the film, Ted Sorensen, one of John Kennedy’s closest advisers, tells Mr. Kennedy, ‘History usually has the final word in these things.’ It’s meant to be a comforting thought, to say that the truth will come out in the end. Watching Chappaquiddick, it’s not clear that’s true.”